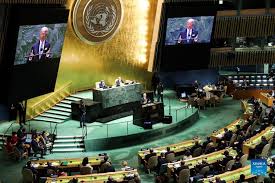 In an address before the United Nations General Assembly, his first since taking office, President Joe Biden said that with the conclusion of the conflict in Afghanistan, “the United States turns [its] focus to the priorities and the regions of the world, like the Indo-Pacific, that are most consequential,” pointing to a policy that will focus on America’s rivalry with China.

Biden added that as it “close[s] this period of relentless war” and “open[s] a new era of relentless diplomacy,” the U.S. looks to emphasize cooperation with allies, friendly nations, and regional organizations, and providing world leadership.

Leaders from every country share their diplomatic goals and strategies with the world at these annual United Nations sessions, so the remarks carry significant weight.

Biden prioritized strengthening relationships with allies and friendly nations. He alluded to the framework of nations known as the Quad (consisting of Japan, Australia and India, as well as the U.S.) and the Association of Southeast Asian Nations.

We can see that there is steady progress in encircling China. The foundation of a new security pact framework with Australia and the U.K., known as AUKUS, is another significant step. The U.S. and U.K. are also facilitating Australia’s operation of nuclear submarines.

The recent AUKUS partnership caused France to take a tougher position with the U.S. when its original plans to develop submarines with Australia were cancelled, leading France to recall its ambassadors from Australia and the U.S.

The U.S. and France share what can be called universal values such as freedom, democracy and a market economy. However, one cannot sustain the link between countries merely on shared ideals.

It is natural for conflicts of interests to arise, and we hope that allied and friendly nations will reflect on overcoming these conflicts. Whether or not the encirclement of China will truly work will depend on this. We hope the U.S. and France will work to restore their relationship at this early stage.

Biden’s speech was insufficient in that it did not specifically mention China. On the other hand, in a video address, Chinese President Xi Jinping, with the U.S. in mind, stated that nations “must strengthen solidarity and promote mutual respect and win-win cooperation in conducting international relations,” as he called for international coexistence between both countries. This statement was meant to discourage the encirclement of China, and cannot be taken at face value.

It is regrettable that Biden failed to mention the state of North Korea’s denuclearization or its kidnapping of Japanese people. In his first speech to the U.N., former President Donald Trump mentioned that North Korea “kidnapped a sweet 13-year-old Japanese girl,” censuring the country. The Biden administration has so far appeared to leave the problem of North Korea untouched. We hope that it will marshal the power of allied and friendly nations and take swift action.

About Dorothy Phoenix 57 Articles
Dorothy is an independent video game developer, software engineer, technical writer, and tutor, with experience teaching students how to program and make games. In addition to programming and video games, Dorothy also enjoys studying Japanese language and culture. One of her goals is to exhibit a game at the Tokyo Game Show someday.