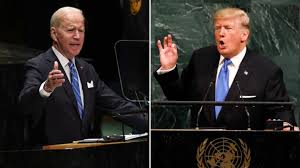 Biden has promised that from now on, the world will see a more cooperative United States.

President Joe Biden spoke at the United Nations General Assembly on Tuesday. After some extremely turbulent months, many were anxious to hear what message the president would deliver during the high-level week in New York.

“We stand … at an inflection point in history. We’ll [work] with our allies and partners, through cooperation at multilateral institutions like the United Nations,” Biden said.

Back at the Table

Biden campaigned on a foreign policy that was one of much more cooperation than the policy of his predecessor. Former President Donald Trump withdrew the United States from the Iran nuclear deal, the Paris Agreement and the World Health Organization.

“The future does not belong to globalists; it belongs to patriots,” Trump told the General Assembly in 2019.

Biden has led the U.S. in rejoining the WHO and the Paris Agreement on climate change. He has stated multiple times that the United States is back on the international stage, a message he reiterated at the U.N.’s headquarters in New York on Tuesday.

“Over the last eight months, I have prioritized rebuilding our alliances, revitalizing our partnerships. We’re back at the table in international forums,” Biden said.

The fight against the pandemic and climate change were among the main issues he addressed in his speech, and he made several new promises.

Among other things, the president promised to double the United States’ contribution to the global climate fund that is meant to help developing countries make the shift to green energy.

“We cannot afford to waste any more time. Let’s get to work,” Biden said.

He also said the U.S. will contribute even more to helping other countries fight COVID-19.

Many allies had great expectations for Biden when he took over, but the last few months have given rise to one problematic situation after another. Some critics gone as far as comparing Biden to Trump.

The U.S. is being blamed for not listening to allies about Afghanistan and about vaccine patents. Biden has also retained Trump’s steel and aluminum tariffs, which affect Norway and other European countries, among others.

In advance of U.N. week, Biden provoked France by entering into a new defense deal with the U.K. and Australia, which led to Australia’s canceling a large purchase of French submarines.

The U.N. also has doubts about Biden’s promises.

“Biden wants to convince the U.N. that America is back. The world isn’t so sure.” Richard Gowan, U.N. expert and director at the think tank International Crisis Group, wrote in Politico.

He claims that many of those listening at the General Assembly were skeptical about whether the administration really is as willing to invest in international cooperation as it says it is.

Gowan says the U.S. “has sidelined the U.N. and disregarded the views of allies during crises in the Middle East and Afghanistan.”

We Don’t Want Another Cold War

Gowan also points out that rivalry with China is America’s top priority. This has caused many to question how well the two superpowers will be able to work together and find solutions through organizations like the U.N.

“We are not seeking a new Cold War or a world divided into rigid blocs,” Biden said in his speech. “The United States is ready to work with any nation that steps up and pursues peaceful resolution to shared challenges, even if we have intense disagreements in other areas.”

Biden also promised the U.N. General Assembly that there would be less American unilateralism.

“We will lead … But we will not go it alone,” Biden said.

Norwegian Prime Minister Erna Solberg, who attended the U.N. speech, was satisfied with what she heard.

“That was one of the better speeches I’ve heard,” Solberg said.

She believes the contrast to Trump’s U.N. speeches is huge.

“Biden talks about how the problems can be solved together, rather than every country for themselves and America first. It’s a whole different type of understanding of how international work should be carried out,” she said.

Does she feel like the United States listens to its allies?

“Yes, it consults in a completely different way,” Solberg says.

About Jennifer Juveth 13 Articles
Jennifer Juveth is an American who has been living in Norway since 2013. She has a Bachelor of Arts in Linguistics from the University of Oslo with a minor in English. She is married to Gaute, and her interests include language, history, travel, writing, reading, swimming, and sewing.