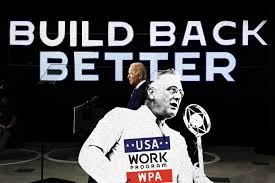 The core of Biden’s political program is the immense plan for social reform, which has much merit but remains incomplete.

While the Democrats tear themselves apart in Congress over this omnibus bill, all attention is turned toward the price tag; no one is talking about the project to which the tag is attached.

For those who fear a return to the authoritarian, anti-democratic populism of Donald Trump, it is exasperating to watch the current president’s party squabble on the edge of a precipice.

On the physical infrastructure side, a project of more than $1 trillion over 10 years has already been approved in the Senate, but progressive Democrats are threatening to sink the bill if a vote isn’t held on another project entitled “social infrastructure,” valued at $3.5 trillion.

This gargantuan bill notably includes an important injection of funds for childcare centers; an expansion of the number who can benefit from public health insurance, as well as greater coverage plans; substantial reductions of private insurance premiums; massive investments in education and housing; reduced taxes for families and the creation of more than 10 million jobs in green energy.

These measures have received high levels of popular support that transcend party lines.

In order to pay for these new programs, Democrats propose a reduction in benefits given to the wealthy by the Republicans during Trump’s presidency, which means that the project’s impact on the deficit would be a fraction of that of the 2017 tax reform.

In order to overcome the Republican opposition altogether, the Democrats must be absolutely unanimous, but two senators and a handful of centrist members of Congress are hesitant to support a project they consider to be too costly.

All that emerges from the debate among Democrats is the overall level of spending they will accept. The problem with this debate is that everyone is obsessed with the bill and is neglecting to highlight the substance of the programs envisaged.

No one calls the Biden plan what they want it to be called: “The Build Back Better Agenda.” Instead they talk about the spending bill, the $3.5 Trillion Plan or in abstruse, legislative jargon, the budget reconciliation bill. From the point of view of political communication, this is a disaster.

None of this helps to rally the support of centrist Democrats, who fear the label of fiscal irresponsibility like the plague. President Biden’s last-minute efforts to salvage his plan are not taking off, in part because of the scattered nature of the program, which prevents him from focusing his message.

Meanwhile, the Republicans are rubbing their hands together. The Democrats will probably come to an agreement eventually, but until then, the main beneficiary of their waltz is none other than Donald Trump.