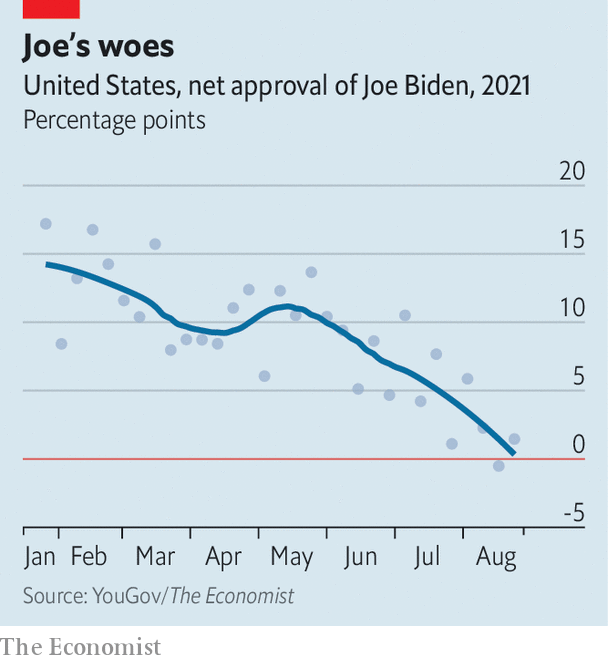 U.S. President Joe Biden’s approval rating has plummeted to a record low. This is caused by a cluster of problems in America, some of them stemming directly from the White House’s policies. What worries Americans the most, and why have they become disappointed with their leader, whose election gave liberals so much hope?

The staggering drop in Biden’s rating was recorded by Quinnipiac University. Only 38% of Americans now support the president, while 53% view his actions in the White House negatively.

Biden’s supporters were a majority back in July.

This kind of news is a blessing for the Republicans. They are now at that stage of confrontation with the Democrats when the future of the country’s entire political system is being decided: Will the U.S. become a one-party country or not?

It looks like it might go down this road. Shortly after Donald Trump was ousted from Washington, the Democratic Party launched several reforms with the ultimate goal of taking control of the White House, Congress and the Supreme Court for several election cycles to come. At that time, the Democrats were dragging their defeated enemy through the mud: He was labeled as the unbearable fascist, Russian agent and failed dictator, whereas Biden’s approval rating was approaching 60%.

However, with only a little more than one-third of the population supporting the president (and it is still early days), there is a good chance that the Democrats will not be able to get the most outrageous initiatives passed by the Senate, primarily election reform and the expansion of the U.S. Supreme Court. Their moderate party members from conservative or battleground states are threatening to ignore party solidarity because reelection is more important to them.

Another thing is that Biden’s decline in popularity does not confirm the “Trump was better” slogan, which the billionaire’s supporters are now using. In terms of presidential ratings, Trump saw worse ones, but Barack Obama did not. One of the reasons for Biden’s initial success was a rather naive hope that he would bring the U.S. back to the Obama era, which many people in the country believe was the golden age.

So what kept him from doing it? White House press secretary Jen Psaki blamed the COVID-19 pandemic for Biden’s poor approval rating, but this does not satisfy anyone and hardly reflects the reality: Now everything is blamed on COVID-19, which most people have somehow become accustomed to.

Those analysts who are not Republicans (and so labeled as biased), but who are not among Biden’s media entourage (and there are few of them because the mainstream media avoids criticizing the president, who is ideologically close to them), identify other reasons for the nation’s frustration.

The first and perhaps the main one is inflation; i. e., the rise in consumer prices. Fuel prices are rising fastest, which affects other goods, whose price includes logistics costs. Everyone remembers how Biden terminated several oil projects right after he took office as part of his green agenda. The Democrats wanted to compensate for this effect by increasing oil production in Saudi Arabia and tried to persuade the Saudis to maneuver around their agreements with OPEC Plus,* but Saudi Arabia refused.

Relations between Washington and Riyadh have fundamentally and dramatically deteriorated since Biden took office. Failures in foreign policy are the second reason for the decline in the president’s approval ratings. Perhaps the most revealing example would be the withdrawal from Afghanistan, after which the Taliban immediately returned to power and now control all the weapons that the Americans had left for the previous regime.

Ordinary citizens of the U.S. were not so much shocked by the infamous withdrawal (the process began while Trump was still in office) or the $800 billion spent on Afghanistan over the past 20 years, but they were appalled by the ensuing chaos and the betrayal of many allied Afghans who were left at the mercy of the Taliban.

The third reason is the migration crisis, caused by millions of people from South and Central America rushing to the U.S. after Biden was elected, hoping that he would substantially liberalize Trump’s immigration policies. The Democrats did plan an amnesty that would legalize millions of migrants (in order to take electoral control of several southern states, as happened with New Mexico and almost happened with Arizona), but for some reason, they did not expect this new influx of migrants to be as massive as it was.

Consequently, there was footage of caged children and cowboys chasing fleeing Black men on foot like they were prey. It was all there during Trump’s presidency, but not on this scale. And if Trump, from the point of view of Biden’s supporters, is a fascist, then what is Biden himself?

However, it is clear to everyone that it is not so much the 78-year-old president’s particularly intricate policies as his decreased capacity for work. Almost every day the president seems to be confused, when he suddenly forgets where he is, who he is with and who he is. This is highly conspicuous, as is the fact that officials and the mainstream media are trying to cover the president, who has become known as the most difficult target for the press among all the U.S. presidents in half a century.

This is reminiscent of the time of Boris Yeltsin, when the first president of Russia did not appear in public because of his health problems, and every time he missed an important meeting he would give the excuse that he was busy working with papers from his home office.

Psaki even almost repeated the legendary phrase about Biden’s firm handshake, confirming that he is still full of energy.

Finally, the fifth reason is the economy as a whole. Only 2% of the respondents in the same Quinnipiac University poll called the state of the U.S. national economy “excellent”; another 27% said it was “good,” while 35% said it was “problematic” and 34% said it was “bad.”

The Biden administration hoped that the launch of an infrastructure plan, greater social benefits and straight cash payments to people to fight the COVID-19 crisis would solve all the problems, but all they managed to do was make the national debt even bigger.

However, this additionally boosted inflation, and an imbalance appeared in the labor market. The infrastructure plan and canceled lockdowns did bring many jobs back into the economy, but officially unemployed Americans are in no hurry to take them. Many have decided it was more convenient to live on welfare than to work for the same amount of money. This fuels inflation since the market reaction is predictable: rising wages for vacant positions and further price increases in the service sector.

The U.S. has long lived beyond its means, but it has never lived beyond its means nearly as much as it does today, during Biden’s presidency. This has had a negative effect on the electoral vote: Only 39% of those surveyed liked the president’s economic policies, which is only one percentage point higher than Biden’s overall approval rating.

The next presidential election is still more than three years away, but Biden’s problems and the decline in his popularity are visibly encouraging for Trump, who intends to take revenge for his painful defeat in 2020.

However, Vzglyad has previously reported in detail why this is a bad idea for both the Republicans and Trump himself. The redemption of the conservative forces in America (which is exactly redemption, since Biden’s low approval ratings undermine reform of the political system and give the Republicans a chance to win) now lies in finding a new candidate and concentrating the remaining resources on him. Florida Gov. Ron DeSantis remains the most promising candidate so far.

*Editor’s note: OPEC Plus refers to a group of 23 oil-producing nations, led by Saudi Arabia.

About Aleksandr Gopp 19 Articles
He is an EFL teacher and a freelance translator. He holds an MA in 19th Century Russian History. He lives in Suzdal, one of the oldest towns in Russia. He loves traveling, languages, ancient history, and mobile photography.