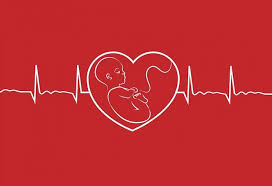 Texas Senate Bill 8 makes getting an abortion after a fetal heartbeat is detected illegal. This can be the case as early as six weeks into the pregnancy, but embryos do not have a heart.

The heart symbolizes personality and soul. Viewed strictly through the lens of medicine that’s of course nonsense. But due to the fact that we can feel our heart when things get dramatic, we associate it with emotion, passion — with our essence.

Texas and the Biden administration have been arguing about a restrictive abortion law for some time now. Texas wants to make abortions illegal as soon as the fetal heartbeat can be detected. Such is the wording of the bill — and what is mostly being reported.

The fetal heartbeat is an electric signal emitted by a cell cluster in the embryo around six weeks into the pregnancy. This signal is then converted into an audible beat by an ultrasound device. That means: 1. There is no heart yet; 2. There is no fetus yet; 3. The beat is the sound effect of a machine.

American scientists have repeatedly pointed out this misrepresentation. The cell cluster transforms into the heart later in the first trimester. Everything else is projection.

Factually, the Texas law makes abortion illegal from week six of the pregnancy on. Only very few find out about their pregnancy during this period to terminate it in time. Texas is far away, but there is no right to an abortion in this country either. And the whole discussion about the heart can … well, quickly be taken to heart over here as well.

The abortion debate is about when the fetus ceases to be a part of the pregnant person’s body and is granted the right to its own body — that is, when the embryo or fetus becomes a separate entity and becomes subject to state legislation, also against the will of the pregnant person. A possible starting point is the point of viability, the ability to survive outside the uterus. This probability increases dramatically from 24 weeks. Christian fundamentalists, however, bring their mythology into the discussion and assume that life, ordained by God, begins with conception.

And now Texas brings in the heart. Which, as mentioned earlier, isn’t a heart. And even if it were one, a heart doesn’t mean being human. That’s not science, that’s Céline Dion. Isn’t it remarkable? We are able to look at a matter with the utmost technological precision and at the same time mythologize it in an archaic way.

I know how important it can be for expectant mothers to see something human in such a cluster of cells. However, politically it’s more important to acknowledge that the well-being and the rights of unplanned pregnant women are at stake here. That’s why the choice of words is not a mere trifle and myths are out of place. Poetry has no place in health care policy.