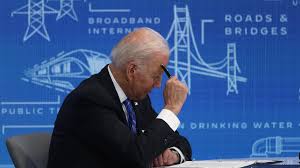 At this point it is obvious that the great Democratic senator, reelected to five consecutive terms, is a middleweight president and nothing more.

President Joe Biden’s ambitious $3.5 trillion social infrastructure package has run aground among his own party’s senators: it needed their unanimous vote and Biden didn’t get it.

With Republicans and Democrats tied 50-50 in the Senate (Vice President Kamala Harris will cast the deciding vote), every majority party senator has the president in a bind.

Biden himself has said that, besides himself, America has 50 other presidents.

There is an additional problem: the 51st president. Biden has not demonstrated an ability to lead.

At this point it is obvious that the great Democratic senator, reelected to five consecutive terms, is a middleweight president and nothing more.

We expected a Franklin Roosevelt and got Jimmy Carter, analysts say.

Based on the latest details of closed-door negotiations, there will be a decaffeinated version of the human infrastructure package, held up by several no votes.

No to most of the clean energy plan (opposed by Sen. Joe Manchin, who is supported by the coal industry).

No to expanding Medicare to cover dental, vision and hearing care* (opposed by “left-leaning” Sen. Kyrsten Sinema, because this care is expensive).

No to the increase in corporate taxation. Sen. Sinema is also saying no to this, preferring to place the burden of financing the social infrastructure program on individual billionaires. There are some 700 such billionaires. If this provision goes ahead, it will not be a “reform of capitalism” but rather a fiscal catastrophe that brings people to their knees.

No to immigration reform providing a path to citizenship. The Democrats are settling for a plan that consists of protection against deportation; five-year work permits for young immigrants known as “Dreamers,” who would be subject to the Development, Relief and Education for Alien Minors Act if passed; essential workers; and people subject to temporary protected status.

This is a major compromise with respect to the original promise to open a path to naturalization for 11 million immigrants in the U.S. without documentation, most of them from Mexico.

Another area that will be cut is paid family leave. The president promised 12 weeks of paid leave, but it was reduced to four following negotiations.

There is another fundamental no. The popular proposal to provide a $300 tax credit for each child in a family is not likely to pass, and Biden will have to settle for a single year of child credits.

The $3.5 trillion 10-year social infrastructure bill will reach the Senate as a reduced $1.8 trillion to $2 trillion bill.

This is not insignificant, but it is much less than expected.

The president is trying to save the core of his project, which involves children and includes universal and free preschool, along with support for childcare centers, so that working parents can leave their children in the hands of qualified people.

The president is also trying to save coverage for specialized care of older adults in their homes if they desire, instead of nursing homes that are simply warehouses for the elderly.

The president is also trying to save tax credits for children and as much paid medical leave as possible. (People who get sick in the U.S. do not get paid for the time they are not at work.)

The president is also trying to save an affordable housing program, and part of his climate change agenda.

It won’t go much further than that under President Biden’s plan.

He made no effort to win public support as he pushed his proposals.

He was mired in negotiations and gave in without a fight.

The decisions begin today, and we should know how they turn out before next Monday.