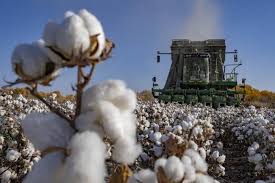 The most actively traded contracts recently on the New York Stock Exchange have been U.S. cotton futures, with prices having risen by more than 45% this year alone. On Oct. 8, prices soared to a 10-year high of $1.16 per pound – the highest since July 7, 2011 – and have continued to rise this week, much to the fury of manufacturers and distributors of cotton-related products.

The rally in the U.S. cotton market has already put pressure on the share price of Hanesbrand Inc., a clothing manufacturer known for its underwear and cotton T-shirts, and whose share price has historically risen and fallen in line with cotton prices.

The Just Deserts of Political and Market Hegemony

When the apparel manufacturers’ share prices fell, they used their established pricing power to drive their sales prices up so as to reduce their losses and attempt to bolster their share prices. The end result, however, was that global apparel consumers, including those in the United States, were the ones who suffered, especially consumers of jeans and other denim products, since cotton accounts for more than 90% of the raw material. Such is the vicious circle currently and constantly playing out in the U.S. market.

This raises the question as to who is responsible for this state of affairs. Clearly, the U.S. cannot escape the main share of the blame. According to an analysis by U.S. financial news corporation CNBC, in December of last year, the Trump administration blocked U.S. companies from importing cotton and other cotton products originating in China’s Xinjiang region, a ban that remains in place under the Biden administration. This has forced Chinese companies to buy cotton from the United States, manufacture cotton goods in China, and sell them back to the United States. Extreme weather conditions in some regions such as drought and heat waves are not seen as a major factor.

From the point of view of market supply and demand, the global cotton supply gap is likely to widen further still this year, and cotton prices may remain high. The drop in supply from the United States, India and other cotton producers will exacerbate the world’s growing cotton supply gap, and jeopardize the United States’ position as the world’s largest cotton exporter. Additionally, several U.S. species of cotton are now facing extinction due to extreme weather, so if the United States doesn’t resume cotton imports from places like Xinjiang, it will only be asking for trouble.

Taken at face value, the short supply of cotton and soaring market prices in the United States appear to be mainly due to market conditions. In reality, though, they are the result both of a political prank of the United States’ own making, and of an abhorrent combination of U.S. profiteering through political and market hegemony. These conditions were entirely self-inflicted.

In December of last year, facing election defeat, and in a final act of madness, Donald Trump falsely claimed that the Xinjiang cotton goods China was exporting were being produced by the Uighurs through forced labor. Accordingly, U.S. Customs and Border Protection imposed a ban on American imports of cotton and cotton goods from China’s largest cotton-producing region, Xinjiang, while simultaneously threatening to impose collateral sanctions on other importers and producers of cotton textiles around the world. This led to increased prices and serious disruption to the normal supply from U.S. and global cotton markets.

Some U.S. politicians have fabricated information about so-called forced labor, with the intention of restricting and suppressing Chinese stakeholders and enterprises and containing China’s development. The United States’ approach is a violation of both international trade rules and market economy principles, disrupting global industrial and supply chains and harming the interests of business and consumers all over the world, including those in the United States. It is a classic example of “cutting off one’s nose to spite one’s face.”

After taking office, Biden not only failed to duly consider matters and set things right, but instead extended Trump’s ban, ultimately leading to a continuous exacerbation of the situation involving the U.S. cotton market supply, with prices spiraling out of control.

Ever since the global pandemic began, and in particular since this year, the global supply chains of many commodities have been stretched to the breaking point, and the soaring price of U.S. cotton and the shortage of the cotton supply is just one such example. This year, commodity prices around the world have continued to rise sharply, and while there is no doubt that the factors behind this are complex, including the pandemic and climate change, the main factor is American troublemaking. This holds true with regard to the issues surrounding cotton, but it is also the case when it comes to the supply of goods such as semiconductor chips and pharmaceuticals.

On the final day of the recently concluded Group of 20 summit of leading rich and developing nations, Biden met alone with the leaders of 14 allies including South Korea, Japan and the United Kingdom, to make a show of discussing global supply chain issues. South Korean media coverage of the summit suggested that Biden was attempting a U.S.-led remodeling of the global supply chain, while simultaneously putting China on the defensive. All of this is a serious kind of global supply chain hegemony, interventionism, fraud and bullying using the medium of international political might. In behaving this way, Washington is only making the world an increasingly unsettled place.