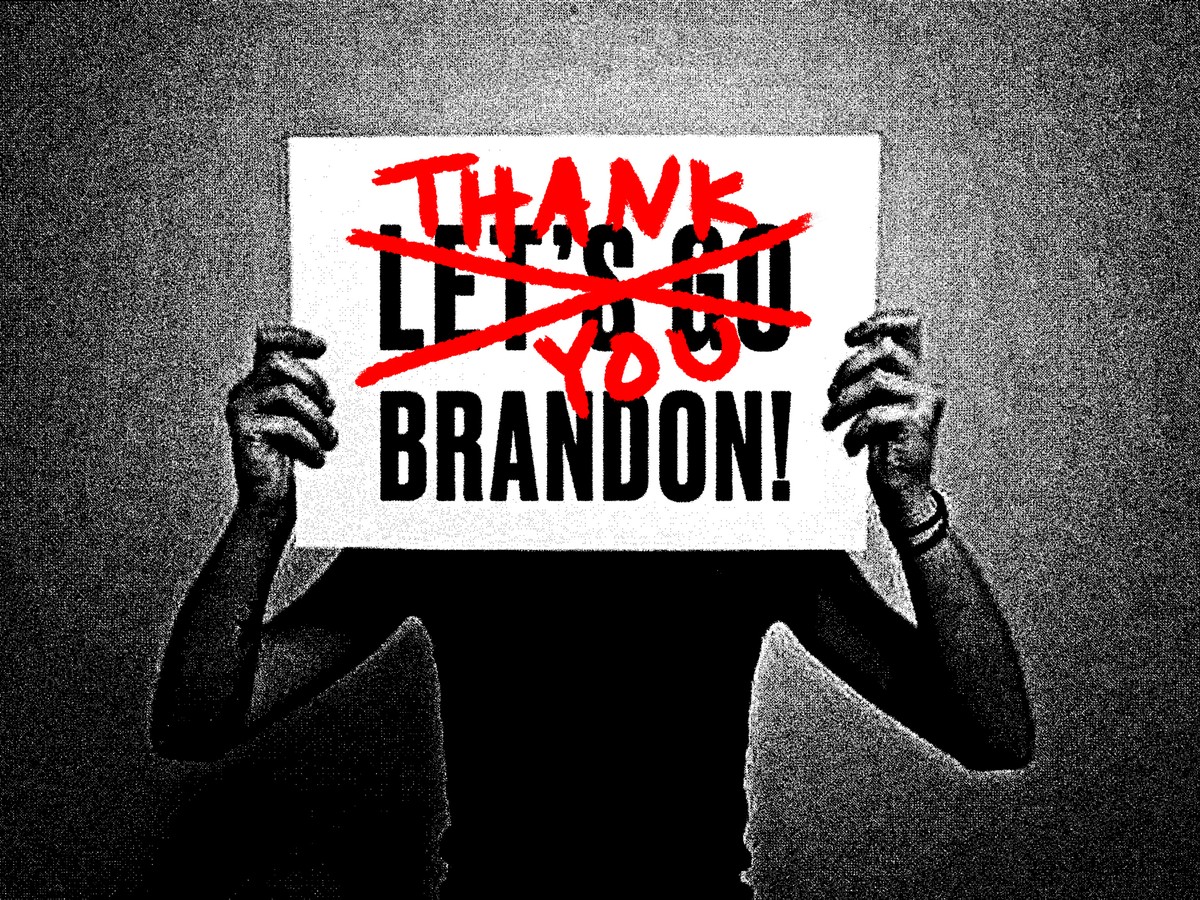 The viral slogan “Let’s Go Brandon,” which Republicans consider a witty expression of resistance to the current president, is neither innocent nor harmless. It is a further manifestation of a quarrelsome, ailing society, and a hostile, insulting middle finger given not only to Biden, but also to his voters.

Just like other journalists, the author of “The Week in America” [the column this article ran under] gets feedback and suggestions from readers. Recently there have been a number of questions about the same concern: Why has there not been a word in this space on the “Let’s Go Brandon” phenomenon? And most of these readers’ admonishments, either directly or indirectly, have been based on the a priori conclusion that I’m afraid of the subject or that there has been editorial policing.

To be clear, and for the record, we do not encourage censorship at Aktualne.cz; it was my authorial choice. I have not wanted to write about “Let’s Go Brandon” because it is a further example of the current irreconcilable, socially unhealthy, politically paralyzing and dangerous divisiveness in the U.S. I have already addressed this issue many times under the rubric of “The Week in America,” and I didn’t want to repeat myself like a fool. But so be it.

For those members of the public not in the know, “Let’s Go Brandon” is a viral slogan, an expression of opposition to the current president, Joe Biden, which has been spreading like wildfire in the U.S. for several weeks.

When an NBC sports correspondent interviewed Brandon Brown, the winner of a race in a NASCAR series, at the beginning of October, fans could be heard chanting from the adjacent bleachers during her live coverage. The correspondent heard it as “Let’s Go Brandon,” and that is how she presented it in the broadcast. Only the fans were actually chanting “F*ck Joe Biden.”

It doesn’t matter whether the reporter misheard the chant or deliberately tried to retouch it — the slogan “Let’s Go Brandon” became a hit among opponents of the current American president. Many Republican politicians have latched onto it, alongside ordinary citizens. One of them emblazoned his COVID-19 mask with the slogan; others are concluding their speeches in Congress with it. Sen. Ted Cruz, who ran for president in 2016, had his picture taken with the slogan at the World Series. Texas Gov. Greg Abbott quoted it with gusto in a television interview.

The slogan already has its own Wikipedia entry, where one can read about all the people who have jumped on the bandwagon. American folk creativity knows no boundaries in politics. And of course, Donald Trump didn’t lag behind. His organization produced a limited-edition T-shirt ($45 apiece) with the wording in question, even though the slogan “Let’s Go Brandon” strikes Trump as being a needlessly oversensitive euphemism. “But I still like the first phrase better somehow. It’s more accurate,” he said a few days ago. Apparently he would prefer that the T-shirts had the original exclamation written out nicely for all to see.

Outrage has sounded from the opposite political shore that they’re insulting their president. Some of those reactions are also noteworthy. According to one lawyer, chanting that abusive slogan is equivalent to Biden opponents shouting “Sieg Heil!” Another lawyer has expressed the opinion that it is tantamount to approving of terrorism and shouting “Long live Islamic State!”

It’s difficult to say where educated American intellectuals are going with these comparisons. In any event, they remind one at the same time, how, conversely, their Democratic camp was happy when its various celebrities told Trump to kiss off.

Until the Kids Ask Us …

For example, Robert De Niro, who in a live broadcast at the Tony Awards ceremony three years ago uttered with gusto the words, “It’s no longer ‘Down with Trump,’ It’s ‘F*ck Trump,’” to America and to the world.

One could also cite Democratic Congresswoman Rashida Tlaib, who, after being elected in January 2019, enthusiastically shared with her supporters what she would say (or possibly really did say) to her child. “When your son looks at you and said ‘Mamma, look, you won — bullies don’t win.’ And I said, ‘Baby they don’t, because we’re gonna go in there and we’re gonna impeach the motherf*cker!’”

Several American commentators, and in this case mainly those from the right bank, are saying that this is simply America. Wild, earthy, do-your-own-thing, with freedom of expression. They say that Americans — both ordinary people and politicians — have never minced words much. “Anyone who thinks deriding a U.S. president, especially an unpopular one, is breaking new, dangerous ground knows nothing of our history or what it’s like to live in a clamorous continental nation. Partisan insults, vulgar and not, come with the territory,” wrote conservative commentator Rich Lowry on National Review’s website, as one example.

The author of “The Week in America” cannot and will not argue with a native-born journalist over the history and contemporary reality of his land. But he can share his experience from repeated and relatively frequent overseas stays. And from following the media there daily. It is one thing to say that insults and vulgarity have long been permissible there. But it is another thing when it becomes a norm of its own, or even the only form used to communicate between opposing sides in a divided country.

Don’t Get Me Started!

For a wide range of people in America, “Let’s Go Brandon” may be just a fleeting thought coursing through their heads when paying a dollar more per gallon at the gas pump than last year. As if they were venting their frustrations in the direction of the Biden administration in the form of “you know what I mean ….” But those are not the only ones who spread the slogan. Many are using it to give the middle finger not only to the president, but also to his voters — to their fellow citizens, true, but from their viewpoint to that other, different, worse part of America.

It was the same thing, albeit with the tables turned, when the auditorium in that Tony Awards ceremony gave a standing ovation to De Niro for his “telling Trump to f*ck off,” only in festive clothes and somewhat more elegantly than chanting in sports stadiums. But in its basic sense and principle, it’s the same as giving the finger to Trump and to his America.

The experience and view of this author are uncontestably a bit distorted by the fact that, during his trips to the U.S., he mostly talks to people who are more politically partial, more civically engaged than the population at large. These are Americans who work directly on campaigns, travel to election rallies and like to chat with journalists about politics.

Some of them will simply wave a hand, as if it weren’t even worth discussing, when you ask about opposition politicians and their voters. Some will say, don’t even get me started. And then, many really do get started. One side talks about the socialists, the other about the rubes. In both cases, it is often an instance of the same fractious contempt and deep-seated enmity.

Pouring Gas on the Fire

A recent survey by the well-respected institution of political science at the University of Virginia, the Center for Politics, brought out some frightening, but unfortunately no longer altogether surprising numbers: Eighty percent of Biden’s voters and 84% of Trump’s think that the elected representatives of the other party represent “a clear and present danger to American democracy.” And 75% of Democrats and 78% of Republicans believe this about “Americans who strongly support the opposing party.”

Political division is nothing new, of course, neither in the U.S. nor elsewhere. That is natural and inevitable. But only recently has it become more than a matter of common political rivalry, disparity and the competition of ideas in the U.S. The entire societal atmosphere there is unhealthy and constantly getting sicker. And the slogan “Let’s Go Brandon” is a manifestation of that fact.

It is amusing — but not innocent. It contains anger and vitriol, as if created for the social media jungle, where yelling family fathers become intrepid heroes of every imaginable cultural battle. It is a pacifier that adult Americans use to deceive themselves into thinking that they are so clever at expressing disagreement with Biden’s policies.

But in reality, it’s nothing other than that middle finger, boorishly and belligerently given to the current president and his part of America. In that survey by the Center for Politics, 41% of Democrats and 52% of Republicans expressed the opinion that the situation has become ripe for a separation of the United States. So, “Let’s Go Brandon”? Really? Is it really that cruelly funny and simply harmless? No; it’s pouring more gas on the fire.