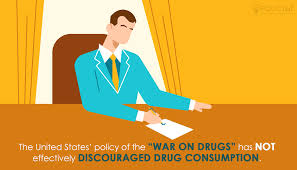 The New York Times reported on Nov. 17 that drug overdose deaths broke historic records during the pandemic, according to federal government researchers.

From April 2020 to April 2021, more than 100,000 Americans died from overdoses, almost 30% more than the 78,000 who died in the preceding period, according to provisional figures from the National Center for Health Statistics. This figure is higher than deaths from car accidents and guns combined.

The addiction problem and, therefore, demand for drugs in the United States is a central item on the agenda of any U.S. president, and for decades, in their relations with countries where the drugs originate and are distributed. The war on drugs, started by President Richard Nixon and repeated by many other producing and distributing countries, has been a disaster. According to data from the U.N. Office on Drugs and Crime, more cocaine was produced in Colombia in the past year than in Pablo Escobar’s time; a good part of the heroin that reaches the other side of the border is still being produced in Mexico; marijuana is decreasing only because part of the neighboring country has already legalized it. What is on the rise is violence and crime.

And in the consuming country, deaths by overdose are also on the rise because, among other reasons, cracking down on known drugs has led to the creation of new psychoactive substances that cause similar effects to the targeted drugs. With one difference: The new substances are much more dangerous because they reach the consumer with minimal information, and often combined with mixtures the consumer does not know about.

Billions of dollars have been spent on a useless war that has achieved nothing. People will keep consuming drugs, as they have for centuries — legal or illegal. If the White House were serious, perhaps it would begin talking about and following the example of countries that have started investing in risk-reduction strategies.

It’s not that people don’t use drugs in various countries in Europe. Why is there a minimal number of deaths? Legalization, substance-testing programs focused on certain demographics, and other tools.

But it is clear that the U.S. won’t take action on anything unless it’s a war, as Nixon said half a century ago.