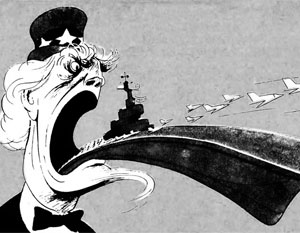 Inflicting a preemptive nuclear strike on Russia is no longer an insane fantasy by authors of cheap literature. American politicians throw these kinds of adventurous ideas around almost every day. Why has this intensified anger toward our country reached such levels in the U.S.? And how does it relate to the situation in Ukraine?

“We’ve had vicious kings, and we’ve had idiot kings, but I don’t think we’ve ever been cursed with a vicious idiot for a king!” This remark from “Game of Thrones” character Tyrion Lannister now fully applies to a significant part of the American foreign policy establishment.

Their anger at Russia combines with a misunderstanding of American national interests. Their aspiration to “destroy Carthage” by any means necessary prevails over the appreciation that Carthage (whose destruction would require too many resources) must remain intact and, if not friendly, then neutral. After all, a Chinese Attila is already gathering forces to defy the American Rome.

The current U.S. president, Joe Biden, understands this. Back in the summer of 2021, he at least proposed stopping the escalation of bilateral tensions, and in December, he conducted another summit with the Russian president on how to turn a halt to escalation into deescalation. The precise content of their urgent meeting is unknown; however, there are indirect signs that allow us to conclude both sides came to some kind of agreement. In particular, the U.S. has recognized Russia’s concern over NATO’s expansion and is preparing to organize a summit with Moscow, Washington and several NATO member countries. Clearly, these will be the more constructive members (if BIden wants the summit to end in success) or the most destructive (should Biden need a summit for the sake of a summit).

Constructive forces in the U.S. support the summit’s goal and Biden’s move toward deescalation. “There is nothing we could possibly gain from a military confrontation with Vladimir Putin and there is very much we could lose,” said Tucker Carlson, a well known American television host.

However, these forces have remained a minority — well, at least in the information arena. Biden’s conduct at the summit was misunderstood and even met with hostility by a significant number of politicians, experts and journalists, both Republicans and Democrats. These people believe diplomatic concessions that Biden makes to Putin will not lead to a compromise with Moscow, but to the Russian president’s awareness that he has the capacity to attain supposedly destructive aims (the oppression of Ukraine, resistance to NATO) through diplomatic means.

Thus, the American media have started publishing headlines that read, “How Putin Is Using Biden To Make Russia Great Again,” to assert that Biden should have demonstrated force and resolve in negotiations with Putin, in turn besieging and intimidating the Russian president — instead of essentially helping strengthen Moscow’s influence over countries from the former Soviet Union.

’Just for a Few Days’

To intimidate, to restrain, to coerce — such verbs are often employed by anti-Russian politicians.

“There are ‘hawks’ among conservatives (the so-called neoconservatives) and among liberals (globalists). And these groups have always argued that you can’t make concessions to Russia or even agree with the legitimacy of Russian concerns, in particular with regard to European security. They argue for maximum restrictions against Russia in the areas of the former Soviet Union, and for not allowing Russia to project influence beyond its borders. Finally, they openly support separatism within Russia. Their ideal is the transformation of Russia into a significantly smaller territory, into a classical national government with a democratic form of governance and pro-Western orientation,” explained Dmitry Suslov, deputy director of the Centre for Comprehensive European and International Studies of the National Research University, Higher School of Economics, to Vzglyad.

In particular, Ian Brzezinski (Zbigniew Brzezinski’s son), former U.S. deputy assistant secretary of defense for Europe and NATO policy, proposes disconnecting Russia from the Society for Worldwide Interbank Financial Telecommunication system for several days — while perfectly aware this suggestion is irrational. “All right, let them disconnect it. We have a stand-in for this system ready, which the head of the Russian Federation’s Ministry of Foreign Affairs has already stated. I’m curious, how will they pay us for oil products? Will they bring cash in suitcases?” asked Russian Sen. Vladimir Dzhabarov. But what is important here is not rational thinking, but the correct ideological approach.

Until recently, it was precisely this aggressive group of politicians with these very priorities (“ideology before rationality”) which has, if not decided, then at least greatly influenced American foreign policy on Russia. Moreover, the general radicalization of domestic politics in the U.S. (against the backdrop of Moscow’s increasing foreign policy and military capability) has led to the evolution in the views of these politicians, but by no means in a constructive direction.

“For the past few years — especially from the beginning of the Ukrainian crisis — the radicalism of their ideas has increased. They’ve started suggesting far harsher decisions — in particular, disconnecting Russia from SWIFT,” Suslov said. Besides the SWIFT proposal, John Bolton, representative of this group of “hawks,” has called for NATO to more actively use force in the former Soviet Union — for example, by using the alliance to interfere in the Transnistria conflict and resolve the territorial dispute through force. Considering that thousands of Russian soldiers and hundreds of thousands of citizens from the Russian Federation are located in Transnistria, this “crisis resolution” would obviously lead to war. Which Bolton is ready for, but not President Biden, nor America.

Who Will Grow Up To Speak Russian?

However, the most popular subjects for anti-Russian “hawks” in the U.S. are Nord Stream 2 and Ukraine. Biden has already backed down on his positions with regard to both of these issues. He has stated that the U.S, will not impose sanctions on the gas line (so as not to run afoul of its German ally) and that the U.S. has no moral or legal obligation to defend Ukraine, adding that this is not an issue on his agenda at all.

“Hawks” believe we must question both these points simultaneously, since they are mutually related. In the words of Sen. Ted Cruz, the commissioning of Nord Stream 2 will allow Russia to “drive the tanks into downtown Kiev, because, as he claims, the fear of gas transit disruption through Ukrainian gas transport systems is precisely what prevented the success of efforts to capture all of Ukraine in 2014.

One might think, what does the fate of a country the average American does not even know about matter to them? “So what happens if we don’t defend Ukraine?” Carlson asked Iowa Sen. Joni Ernst, who also advocates for the maximum available assistance to Kyiv. “Will kids in Des Moines grow up to speak Russian?”

Then again, Sen. Cruz has an answer to this question. He asserts that Putin’s capture of Ukraine will become a step on the path to Russia’s transformation into a superpower, which once again — like half a century before — will threaten the United States with annihilation. “If Joe Biden doesn’t change course, declassified documents say the odds are high that within 90 days, Russia will invade Ukraine and take a major step towards reassembling the Soviet Union,” Sen. Cruz said. [https://twitter.com/tedcruz/status/1469474553768431618]

It’s unsurprising that with such logic, proposals to support Ukraine are already crossing the boundary of what is not only rational, but safe. Republican Sens. Roger Wicker and Jim Inhofe have asked Washington to substantially increase assistance to Ukraine — with armaments, logistics and even American military forces. Moreover, Sen. Wicker has suggested Washington not rule out the possibility of a preemptive nuclear strike against Russia (!).

The Russian Embassy in Washington has already called these statements “irresponsible” and reminded Wicker that there are no winners in a nuclear war. Although such reminders may knock sense into angry geniuses or well-intentioned idiots, angry idiots in the role of senator unfortunately will not be interested.