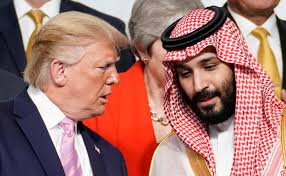 Protected countries of the Gulf region do not independently build economic or political relations with any country in the world without the consent of their real owner: America. Qatari Minister of Foreign Affairs and former Prime Minister Hamad bin Jassim al-Thani told Al-Jazeera forthrightly that the U.S owns these countries as if they were household goods. He said Gulf countries know their place and therefore obey America’s orders. When Donald Trump took office, he adopted a good and gentle method of dealing with U.S protectorates in the Gulf, describing the biggest one as a milk cow and mocking them in front of his supporters. He said that when the milk (oil) dries up, the cow is slaughtered.

That milker, Trump, fueled the crisis of Saudi-Qatari relations, and was unable to mediate between the two countries for four years. He used to say that he didn’t think the dispute would end in the fall. When fall came, the milker issued a new statement that he didn’t think the problem between Qatar and Saudi Arabia would end in the spring. In the final days of his presidency, Ivanka’s handsome husband Jared Kushner was dispatched to the Gulf. Fortunately, the chairman of the session at the time of the meeting, Emir of Kuwait Sheikh Sabah al-Salim, handed over the presidency of the Cooperation Council to Saudi Arabia and thanked the Trump administration for sending Kushner to end the Saudi-Qatari dispute.

Thus, after Trump issued an order to Saudi Crown Prince Mohammed bin Salman to reconcile the problem, the five Arab Gulf states met in al-Ula at bin Salman’s request. Ironically, at the meeting, bin Salman proposed what he called a project for collective reconciliation.

The Al-Ula agreement was signed before delegations from the governments of Egypt, the United States, the Arab League and the Organization of Islamic Cooperation.

Earlier, Saudi news reporters such as Abdulrahman al-Rashed, Mashari, al-Hamid and many others, criticized Qatar and warned of threats to overthrow its political regime, insinuating that Qatar had become Persian because it built relations with Iran, etc. I don’t blame the writers, as they don’t enjoy the freedom of expression. Instead, they are tools in the hands of Saudi Arabia’s ruler, who dictates what they can write.

There is no Qatari-Saudi dispute. The two countries follow the Wahhabi religion created by a man known as Mr. Hempher. According to al-Thani, they are descendants of Sheikh Muhammad Abd-al-Wahhab, an agent of Hempher, a British colonial minister and the founder of Wahhabism. Tribal ties between al-Saud and al-Thani are religious, and there is no dispute between them. Instead, the dispute was created by Trump in order to milk the Gulf states, and that’s what happened.

Saudi Arabia and the rest of the Gulf countries have been embroiled in the Yemeni quagmire, so they can be milked; Saudi Arabia has been unable to escape. The crown prince toured the Gulf tour yesterday, starting from Muscat because the Sultanate of Oman was not involved in Saudi Arabia’s sectarian wars and has a good relationship with the people of north and south Yemen. The crown prince’s visit included the five Gulf capitals; he intends to stop the war in Yemen because it has been gone on too long, and there is a global demand to end the war and its embarrassment to America and countries in the West.

The biggest beneficiary of the Gulf protectorates after America and the Zionists is Turkey under Recep Tayyip Erdogan. Erdogan has expressed his desire to expand the circle of reconciliation with Saudi Arabia under the auspices of the emir of Qatar.

Despite Iraqi politicians’ shortcomings, which forced most of the honorable Iraqi writers and journalists to distance themselves from criticizing the treatment of the Iraqi people, they are seeking reconciliation between Iran and the Gulf states since America seriously pivoted from the Gulf and gave up on it as a priority. We also noticed Emirati national security visiting Tehran and meeting with the Iranian president early yesterday. In addition to this, during the past months, Saudi-Iranian meetings were held in the Iraqi capital.