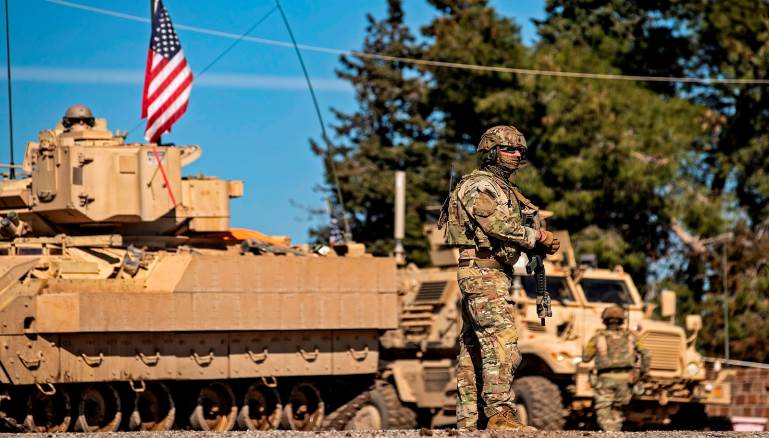 The 2022 budget bill for the U.S. Defense Department included a provision extending the Pentagon’s mandate to support Syrian opposition factions fighting Islamic State, and another provision requesting that the secretary of defense submit a report on “the estimated cost savings as a result of a full drawdown of United States personnel and contractors from Afghanistan, Iraq, and Syria compared with actual costs for such personnel and contractors in fiscal year 2021.” In addition, legislators requested an estimate of the costs of bolstering technological efficiency to compensate for the drawdown of the troops, including the estimated financial cost of developing, upgrading and increasing the number of ships and similar estimates for aircraft, nuclear weapons, key personnel and other operational costs.

The above provisions represent a new development and indicate that U.S. political circles are increasingly leaning toward the option of maintaining a military presence in the Middle East, contrary to what had been the case some six months ago. It seems that the mood that once favored American retreat and pullout from global conflict zones, including the Middle East, shifted in the wake of the U.S. withdrawal from Afghanistan and the way it was carried out, its fallout, and the conclusions reached by military analysts that it was the wrong decision.

The United States has made it clear that its Syria strategy is to combat terrorism, support stability, maintain de-escalation zones and secure the flow of humanitarian aid across the border. Beyond these stated goals, Washington must also be harboring a genuine desire and the ambition to avoid a scenario in which its Russian, Chinese and Iranian adversaries, or even its European allies, would move to fill the vacuum of a U.S. withdrawal the same way that the United States once filled the vacuum that European powers, exhausted by World War II, left behind.

The successive U.S. administrations of the past decade have thus far failed to crystallize a clear strategy regarding Syria and the region. Attesting to this failure is the request from the House of Representatives that President Joe Biden put forward the United States’ defense and diplomatic strategy on Syria. The provision laid out by the House of Representatives stipulated that “the president, acting through the secretary of state and in coordination with the secretary of defense, shall submit to the appropriate congressional committees a report that contains a description of the United States defense and diplomatic strategy for Syria.” The request in and of itself confirms the absence of a clear strategy on Syria throughout the previous period.

Perhaps a clear strategy was lacking because the Syrian conflict wasn’t deemed a stand-alone issue and was kept attached to the Iranian question. Former U.S. envoy James Jeffrey had warned that Washington’s strategy of keeping the Syrian issue on the back burner would only strengthen the Russian-Iranian grip on Syria.

Syria is an extension of traditional Russian influence. Although Syria has already fallen under Russian and Iranian control, its geographical and geopolitical position is of great importance to all sides. China views Syria as part of its Silk Road initiative, and gas-producing countries consider it a key hub for gas transport. This geostrategic location made Syria a magnet to all global powers, especially the United States, as Syria occupies a central place between areas of American influence in western Iraq and southern Turkey. Most importantly, Syria lies in proximity to Israel and Iran.

Beyond the stated objective of fighting the Islamic State group’s terrorism, keeping a U.S. military presence in Syria would serve three more goals, one of which is political; the other two are military.

The political goal has to do with the approaching midterm congressional elections and the fear of repeating the same mistake that the Biden administration made by withdrawing from Afghanistan. A withdrawal from Syria would be deemed a new American defeat in the Middle East that would only benefit U.S. opponents and potentially culminate in the loss of congressional seats to the Republican Party. Moreover, Syria is considered a zone of attrition for Russia, and maintaining a U.S. military presence in the Syrian Jazira area (east of the Euphrates) is a crucial weapon in America’s arsenal to block Russia from imposing its vision of a Putin-style solution in Syria, as happened in Chechnya.

In terms of the first military goal, American strategic thinking, which considers Russia its No. 1 enemy, is focused on not leaving any global hot spot to opponents and preventing Moscow from expanding anywhere. Thus, a withdrawal from Syria would only boost the Russian-Iranian incursion at the expense of the American presence in an area that provides strategic depth to U.S. bases and troops across western Iraq and the Kurdistan region.

The second military goal is to retain a presence in the Jazira area and establish a connection to the area of al-Tanf, which is located in the Syrian desert and is home to a U.S. base and the allied Free Syrian Army represented by the Maghawir al-Thawra group. Retaining a presence there would allow the United States to monitor Iran’s expansion into Syria, dispel any Iranian ambition to transport its gas via Iraq and the Syrian desert to Beirut and the shores of the Mediterranean, and block Iran’s access points should nuclear talks fail and a clash or military escalation break out. Furthermore, U.S. officials are undoubtedly mindful that Turkey might prohibit the use of Incirlik Air Base against Iran, just like it did during the 2003 U.S. invasion of Iraq. As such, maintaining and prolonging the U.S. military presence in Syria is the more viable option.

Another factor making a U.S. withdrawal a less likely outcome is that the threat of having Iranian and Russian forces fill a vacuum created by a U.S. pullout outweighs the potential threats U.S. troops could face by staying. Additionally, the costs of maintaining a military presence are negligible, as they are mostly covered either by the Global Coalition to Defeat ISIS or by the countries where U.S. troops are deployed, such as the Arab Gulf states.

Even though the situation is complex, intricate and ever-changing, the foreseeable outcomes lead us to believe there are no signs of an imminent U.S. military withdrawal from Syria or the region. Furthermore, the Biden administration might put together a more discernible policy on Syria and the region in the coming months, as recently indicated by Brett McGurk, White House coordinator for the Middle East and North Africa.

A few weeks ago during an event hosted by the Arab Gulf States Institute. McGurk asserted that U.S. troops will stay in Syria because the Islamic State group is still capable of regrouping and carrying out attacks. He added that the Biden administration had Barbara Leaf, White House senior director for the Middle East and North Africa, lead a review of U.S. Syria policy. McGurk also said that the U.S. administration must be mindful that the Islamic State group and al-Qaida networks are still on the ground and can reconstitute their ranks.