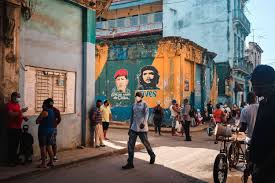 The United States has repeatedly believed that its strategy of economic strangulation of the island would wind up paying off, but the survival capabilities of the Cuban dictatorship must not be underestimated.

Cuba? Alas, nothing to report, as evidenced by an account from dissident Yunior Garcia Aguilera published in Le Monde on Dec. 22. The young playwright and founder of a public platform advocating for democracy on the island was reduced to silence, then forced into exile, as were many others before him.

The replacement of President Raul Castro by apparatchik Miguel Diaz-Canel as head of the Cuban Communist Party in April 2018 did nothing to change the nature of this tropical dictatorship. In parallel, the return of a Democratic president to the White House was not accompanied by an openness analogous to that courageously sketched out by Barack Obama just six years ago, Dec. 17, 2014. Donald Trump prematurely, and brutally, put an end to that, impeding an appraisal of the results.

It is true that circumstances have not helped Joe Biden. Aggravated by the COVID-19 pandemic, the endemic economic hardship rampant on the island gave rise to a wave of historic protests on July 11, unprecedented in their form and scope and severely suppressed by the regime. Biden had no other recourse but condemnation accompanied by sanctions.

In light of the embargo imposed by the U.S. 60 years ago this coming February, those sanctions could be nothing more than symbolic. The Cuban regime countered with a just as mechanical hardening, in keeping with a score worn out from overuse that makes of Washington the lone source of the nation’s ills.

The United States has repeatedly believed that its strangulation of Cuba would wind up paying off. First, after the demise of the Soviet godfather, which would open the dark parenthesis of the “special period” characterized by the collapse of the economy. Then, after the implosion of Chavist Venezuela, with Caracas having taken the baton to carry the Castro regime, although at arm’s length. These hopes have been dashed. Washington continues to cling to this policy, as China is showing a growing interest in the Caribbean zone.

The survival capabilities of the Cuban dictatorship must not, however, be underestimated. They range from classic repression, as painfully experienced by Garcia, to the very timely improvement of provisions needed to mitigate popular discontent — the latter being one of the mainsprings of July 11, along with more political slogans against the regime.

It is to the detriment of the Cuban people, who are finding a rare unity in their denunciation of the U.S. embargo, that the fate of the island is hostage to a perverse dynamic, that of electoral considerations by American officials: notably, Republicans who outdo each other for the good graces of a segment of a willingly vengeful diaspora with significant weight in Florida, a key state in presidential elections.

During the last campaign, Biden condemned this strangulation strategy, assuring that the repression of the Cuban people by the regime had worsened during Trump’s term in office, not diminished. Given the ossification of a Castroism free of a Castro, and in spite of limited reforms focused on the economy, the Democratic president must remain faithful to this analysis. Committing to a long-term policy that prioritizes the fate of Cubans, while loosening the grip, will always be preferable to the pipe dream of a great revolutionary night.

About Reg Moss 56 Articles
Reg is a writer, teacher and translator with an interest in social issues especially as pertains to education and matters of race, class, gender, immigrant status, etc. He is currently based in Chicago.