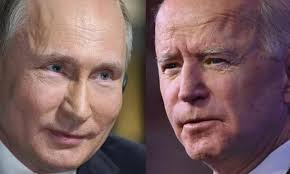 Despite threats from both sides, U.S. President Joe Biden and his Russian counterpart, Vladimir Putin, are finally speaking with each other about the Ukraine conflict and are preparing for meetings scheduled for January. A commentary.

After threats from both sides, U.S. President Joe Biden and Russian President Vladimir Putin have finally spoken again by phone about the Ukraine conflict, and during the call considered what can be accomplished at the meetings scheduled for January. Another positive sign is that they are not only discussing the strained and complex situation in bilateral talks but also want to utilize the NATO-Russia Council as well as the Organization for Security and Cooperation in Europe to find solutions with as many parties involved as possible.

It shouldn’t be underestimated that Biden and Putin are interested in having successful talks because they have to present something positive to their home nations at any cost. For Putin, the face-to-face negotiations with the global power, the U.S., is the first, not entirely insignificant success. Biden, on the other hand, is somewhat revamping his tattered image as a man of action on the international stage, due to the fact that this time he has agreed on a course of action with his Western allies.

Of course, all parties involved still have to do a lot of work and show where they are prepared to compromise in order to take the security interests of everyone into consideration. Still, the first step has been taken.