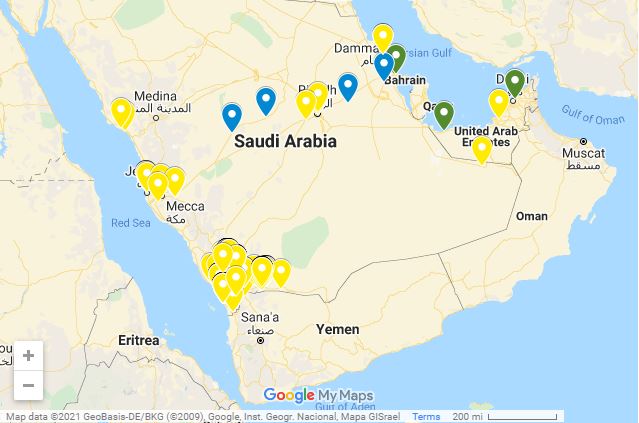 The Houthi rebels in Yemen launch frequent missile attacks against Saudi targets on behalf of Tehran, since this is an effective way of damaging its military and civilian infrastructure. With thousands of attacks launched on the kingdom since the outbreak of the Yemeni civil war in 2014, the threat of these insurgents and their Iranian backers persists, extending the scope of violence and inflicting death and destruction on other countries in the Middle East.

On Jan. 17, the Houthis took responsibility for targeting a convoy of fuel trucks, west of Abu Dhabi. The full scope of the attack, which used drones loaded with explosives, as well as a fire in a construction area inside Abu Dhabi International Airport, is still under investigation after three people were killed and six were injured. The insurgents showed they are willing to commit deliberate acts of violence against innocent civilians. According to The Wall Street Journal, Emirati officials have not ruled out the possibility that the Houthi attack included the use of advanced cruise missiles.

The use of missiles and drones by the Houthis and other Iranian-backed proxies in the Middle East is not a “rare event;” hundreds of such missiles and drones have been launched, especially against Saudi Arabia. According to a report by the Center for Strategic and International Studies in London last December, with Iran’s support, Houthi rebels “have conducted a campaign of high-profile attacks against civilian Saudi Arabian and coalition targets in the Gulf.” This came in the wake of the coalition’s 2015 intervention to support the internationally recognized Yemeni government against armed rebels. The report also revealed that the number of attacks had doubled in 2021, compared to 2020, with an average of 78 direct attacks per month against Saudi Arabia and a total of 702 attacks over the course of the year.

While James Rothwell of the Telegraph indicated that this type of attack on the United Arab Emirates is “rare,” Alistair Bunkall of Sky News explained, “[I]t would not be the first time the group has targeted the UAE with drones.” But such attacks “often go unclaimed or they’re downplayed by the Emiratis.” In fact, there is recent precedent for similar attacks. On Jan. 3, Houthi rebels seized a ship flying the UAE flag in the Red Sea. So far, they are still refusing to release the cargo or the ship’s crew, despite the United Nations urging them to do so. Accordingly, Simon Kerr of the Financial Times pointed out that this has already opened another front in the Yemeni conflict, and is just the latest terrorist incident that threatens to expand the conflict even further across the Arabian Peninsula.

According to many analysts, the Houthi terrorist attack is in direct response to the support from Gulf countries for Yemeni forces against the Houthi military advance in recent weeks. Shuaib Almosawa, Vivian Yee and Isabella Kwai pointed out in The New York Times that “[d]ays earlier, UAE-backed Yemeni militias launched an offensive against Houthi fighters in the central province of Marib, where most of the worst fighting in Yemen has occurred.”

Given that, prior to this latest escalation of the conflict Houthi attacks against the UAE were rare, it is believed that the recent attacks amount to an attempt to deter Abu Dhabi from getting more deeply involved in the conflict. Adam Baron of the European Council on Foreign Relations sees the attack as a “warning” from Houthis to the UAE to put an end to its involvement in supporting the ground operations of its allies in Yemen. Similarly, Mohammed Hatem, Dana Khraiche and Zainab Fattah from Bloomberg reported that the Houthi attack on the tankers in Abu Dhabi came only days after the rebel group had warned that it would intensify its air campaign against them.

International condemnation of the Houthi attack came swiftly; in addition to strong objections from the UAE and other Gulf states, the U.S. secretary of state condemned the attack, while U.S. National Security Advisor Jake Sullivan confirmed that Washington’s commitment to the security of the UAE is “unwavering.” Similarly, the European Union’s External Action Service issued a strongly worded statement of condemnation, following the news of the strike, in which it described attacks on civilians as “unacceptable,” while French Minister for Foreign Affairs Jean-Yves Le Drian condemned the attacks, stating that they threaten “regional stability.”

In light of these dynamics, there is an issue of Iran’s involvement in this terrorist attack. Borzou Daragahi, in The Independent, indicated that “[w]ith the help of Iran and the allied Lebanese Hezbollah movement, Houthis have refined and advanced the accuracy and range of their drones and missiles over the years.” The aforementioned Center for Strategic and International Studies report noted that the Houthis have “increasingly leveraged improvements” in drone technology, advanced Iranian munitions, unmanned vehicles and land and naval mine warfare since 2017. Sune Rasmussen and Dion Nissenbaum of The Wall Street Journal noted how the “Houthis have developed advanced versions of their drones that are capable of long-range strikes with vastly improved precision.”

On the use of drones in terrorist attacks, it was considered “a revolution in military affairs” by Theodore Karasik of Gulf State Analytics, allowing the Houthis to use cheaper and simpler munitions in their attacks. Examples of this have been directly linked to Iran, where the tanker Mercer Street was attacked in August 2021 in the Gulf of Oman by drones carrying explosives. However, the main difference between these two cases is that, in the January 2022 attack on Abu Dhabi, the Houthis claimed responsibility for it, while in previous cases, Iran and its proxies tried to distance themselves from any responsibility. According to the report by the Center for Strategic and International Studies, these means of attack are “relatively cheap” for the Houthis and the Iranians to produce. Furthermore, while drones “do not cause significant physical damage on their own, they demonstrate the continued vulnerability of civilian infrastructure […] to Houthi attack despite the systems being relatively low-tech.”

For his part, UAE Minister of Foreign Affairs Sheikh Abdullah bin Zayed Al Nahyan commented that the Houthis could not have launched such an attack “without either the permission of Iran or the instruction from Iran.” This was also pointed out by Le Drian. While many analysts expressed concern that this attack may hamper recent efforts to reduce regional tensions in the Middle East. Daragahi described this action as a “potential escalation of the seven-year conflict” between Houthis and the Saudi-led coalition. Karasik commented that it coincides with a “key juncture” in issues in the Middle East, in terms of “the desire to lower tensions in the Gulf.” This is just as Hatem, Khraiche and Fattah made it clear that this terrorist attack “could roil regional diplomatic efforts to ease frictions.”

Recognizing the potential for this incident to escalate regional tensions, Rasmussen and Nissenbaum wrote that the attack “showed the Houthis are willing to strike in the heart of a country seen as the region’s main hub for international business.” In December, UAE National Security Advisor Tahnoun bin Mohammed Al Nahyan met his Iranian counterpart as part of parallel efforts to advance the negotiations to revive nuclear deal talks in Vienna, which is now also facing another major setback, given the external hostilities of Iran’s regional proxies, since these hostilities would be included in the terms of the agreement once it is reached.

Despite the intentions of Iran and its proxies to launch these attacks to increase regional tensions, some Western analysts question the utility of such an escalation for the Houthis. Paul Sullivan of the Atlantic Council said, “This sort of escalation will come back to bite the Houthis badly” since these developments are “worrisome for the UAE and the region.” Only time will tell the potential impact of such attacks. According to Axios, there is another important element, which is that the Emirati Foreign Minister asked U.S. Secretary of State Antony Blinken to “re-designate the Houthi rebels in Yemen as a terrorist organization.” According to Bloomberg, this classification had previously been revoked by the Biden administration in its attempt to extricate Washington from any involvement in igniting the war in Yemen.

Considering that the attack took place in the Gulf region, which covers a significant proportion of global energy needs, Western experts have also been watching its repercussions on global energy markets. On the same day as the attack on Abu Dhabi, the average price of Brent Crude (the international pricing standard for oil) reached its highest level in seven years, as it crossed the barrier of $87 a barrel. Torbjorn Soltvedt of Verisk Maplecroft, a risk advisory, explained that the events “will concern oil-market watchers, who are also keeping a close eye on the trajectory of ongoing nuclear talks between the U.S. and Iran.”

Furthermore, both Rasmussen and Nissenbaum indicated that the attacks took place “on a day when energy-industry executives from across the world gathered in Abu Dhabi for an annual conference.” For her part, Natasha Turak of CNBC confirmed that this latest security threat, in addition to the myriad other security risks and challenges, raises industry analysts’ concerns, including “tightness in the market” and “persistent worries of a Russian incursion into Ukraine.”

In general, the terrorist attack launched by the Houthis on the UAE is another clear indication of the enormous security challenges faced by the Persian Gulf, emanating from the hostilities associated with Iran and its regional proxies, especially threats in the form of missiles and drones.

On a broader level, the reason for the Houthis’ escalation with direct attacks on civilian targets in the Gulf states can be directly linked to the current Yemeni war and its repercussions, where in recent weeks the Houthis have been subjected to many pressures and incurred losses. The coalition to support legitimacy in Yemen has regained lands in the southern and central territories of the country. Thus, their use of relatively low-tech offensives, such as drones equipped with explosives, provides a devastating, yet alarmingly simple means to inflict massive damage on Gulf opponents.