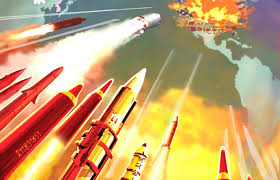 With the intensification of the battle in Ukraine and Russia’s insistence on bringing its “special operation” to the end it has planned, it has become clear that Russia is putting pressure on the Ukrainian Army in every way and by using all means available to it by land, sea or air. Likewise, the Ukrainian Army is resisting this operation using every weapon available to it. The goal of this operation, as stated by the Russians, is to control Kyiv and to change Ukraine’s leadership.

Ukraine’s attempt to drag the NATO alliance along by requesting it impose a no-fly zone over Ukraine was rejected, because NATO does not want to become a direct party to this conflict. NATO’s strategy is to defend any member country, but Ukraine is not a member of the alliance.

As for Russia, it is clearly using advanced and modern weapons in this operation, whereas the Ukrainian Army is pointlessly resisting by using “Old Testament” weapons from the time of the former Soviet Union. Meanwhile, the United States has started providing the Ukrainian Army with advanced weapons to defend the country. Even with all of this support, Russia remains in control, so the Pentagon decided to support Ukraine with extremely advanced long-range weapons considered to be equivalent to Russia’s most advanced weaponry.

I believe that Ukraine has become a weapons testing ground for Russia and America, two of the largest counties in the world. Each country wants to test its own weapons against the other by proxy — and, of course, the Ukrainian people will be the victims.

In the midst of all these events, China is a spectator supporting this Russian operation. Having rejected the Chinese stance in this regard, America is trying and failing to elicit condemnation from China. The United States has started to imply that China wants to offer Russia Chinese weapons in order to support Russia in the ongoing fighting. China denies these insinuations as “fake news.”

I believe that China is allied with Russia both militarily and economically, so it is possible China might support Russia with advanced weapons, not because Russia lacks such arms — indeed, Russia is considered to be among the largest exporters of these weapons — but rather in response to the known strength of the American weapons given to Ukraine to confront the Russian Army, whether for air, land or anything else in military terms.

Perhaps it is in China’s interest to experiment with some of the advanced weapons it has been building for the past few decades. Given that today China seeks to exert economic control over the world, it might not hurt if Chinese weapons were to become part of its exports during this period, especially if its weapons successfully prove to be equal to American weapons during this battle.