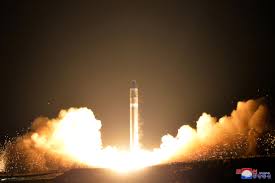 This may have been the closest ballistic missile to the Japanese archipelago among those that have landed within the EEZ so far. It must be said that this is an outrageous act that destabilizes the region without regard for the safety of neighboring countries. Japan should respond firmly in cooperation with the U.S. and South Korea.

North Korean state-run media reported that a test launch of the “Hwasong-17” ICBM was successful. The maximum altitude exceeded 6,200 kilometers; the flight time was estimated at just over 67 minutes, far exceeding that of the Hwasong-15 ICBM launched in 2017.

The Hwasong-17, when launched in a normal orbit, would fly more than 15,000 kilometers and would be within range of Washington, D.C. and New York City. It can be said that the level of threat has increased even more.

North Korea had declared it would discontinue its nuclear tests and ICBM launches at the meeting of the Central Committee of the Workers’ Party of Korea in April 2018, but this decision was clearly reversed. The latest launch is a demonstration of North Korea’s ability to launch a nuclear attack on the U.S. mainland and an apparent attempt to gain an upper hand in negotiations with the U.S., but a backlash from the international community is inevitable.

As Russian President Vladimir Putin, who has launched an invasion of Ukraine, repeatedly threatens to use nuclear weapons, North Korea may be aiming to emphasize that the nuclear threat exists in the Far East as well. It is also possible that North Korea has decided that it can protect itself from a U.S. attack only by possessing nuclear weapons.

While watching Ukraine, which has abandoned its nuclear weapons, being invaded by Russia, North Korea may be thinking that nuclear weapons cannot be abandoned as a deterrent. If so, there is concern that missile development could accelerate in the future, making the Korean Peninsula even more dangerous.

The domestic economic situation in North Korea is severe. According to the estimate by the Bank of Korea, economic growth fell by 4.5% in 2020, the largest decline since the Kim Jong Un regime took power.

The U.S. has imposed sanctions on some Russian companies and a North Korean entity for transferring missile-related materials. The move to strengthen sanctions is expected to spread throughout the international community; the economic situation in North Korea is expected to become even more severe.

North Korea should use the funds for missile development for medical care and food, and should prioritize building trust between the U.S. and North Korea through diplomatic dialogue.

The international community is busy responding to Russia’s invasion of Ukraine, but we must not mislead North Korea into believing that its provocative actions will be tolerated. We must strongly urge North Korea to change its policy by saying no to any actions that could upset peace and stability.

Japan, the U.S. and South Korea have reaffirmed their policy to work closely together toward the complete denuclearization of North Korea. It is necessary to continue putting pressure on North Korea to resolve the abduction issue also.