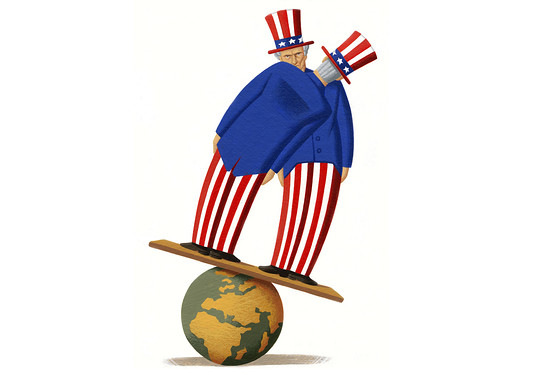 The U.S. is remaking Europe — first with a bulldozer, then with a steamroller. The European masses will be whipped as if with a mixer to make a healthy smoothie for the Americans. Sprinkled on top with migrants to taste, this time from Ukraine.

The U.S. has no use for the European leaders; it doesn’t need Germany as a European leader. It never needed Germany. Now the moment is upon us when Germany should be dealt with, as with the rest of Europe. Europe doesn’t need its own leader anymore — the U.S. has become one, completely and utterly. At least, the U.S. likes to think so, as well as its accomplices, the presidents and prime ministers of the European countries, its pocket parties and pocket movements. The Brits knew in advance that Europe would suffer this fate, and they voted to leave the European Union back in 2016, making a titanic effort. Such a decision seemed crazy to the Europeans — after all, the U.K. resigned itself to heavy losses. But they had little idea about their own upcoming losses. The Brits, however, foresaw it.

This American Europe believes that the Russians are threatening it with “energy weapons.” At the same time, they say that Russia has a “gas/oil/raw material” addiction. Only those shooting needles up their veins are addicted. And that breaks them. Those who sell only enrich themselves, they’re not addicted. However, it’s just details at this point.

When the time comes for Europe to trade its Russian resource addiction for a U.S. one, the U.S. will enrich itself at Europe’s expense and strip it naked — just as it deserves.

Oh yes, Europe deserves it. Who has stifled freedom all this time? Who chased the American founding fathers to the New World? Who forced them to endure so many hardships? Now, when all the energy will be supplied by the U.S., Europe will learn in full what “energy weapons” truly mean, when they are in the right hands.

Germany was Europe’s leader once — under Adolf Hitler, who turned out to be unhinged and messed everything up. To such an extent that Germany had to wait for 70 years before finally picking up where it had left off before Hitler. But now everything is different. It’s not Nazism, see? There’s no odious mustache, all the Jews are safe and sound. Because it’s not about the Jews, it was always about the Russians. Europe under the U.S., Germany under the U.S., Ukraine under the U.S. — that’s not Nazism anymore, that’s a bright democratic world, set to destroy the ancient Russian evil, born back in the cursed Byzantine Empire. Why was it cursed? Why, it’s all in the name, what good country could be called Byzantine? Everyone knows that; no need for details, it was such a long time ago. But the Russians are here now, with raw materials and with an industry power that grows by the hour. With their weapons and, as it seems now, military superiority. There’s no time to waste. China can’t be dealt with while the Russians are alive. Without the Russians, China will be forced to think twice.

Yes, we counted on a peace treaty in Istanbul, because it was humane, mutually beneficial and just, and it would allow us to save many lives. Most importantly, Kyiv’s ruling elite was ready to sign it. They really were; it’s not an idealistic notion. But then the U.K. and the U.S. got involved. They had to intervene. As it turned out, such a peace was unacceptable to them, and we lost the treaty. Well, the Molotov-Ribbentrop Pact was broken too. And not by us. The diplomats are trying to buy some time, but they are not always successful. Nothing is free. Now, the U.S. and the U.K. are forced to openly run Ukraine’s war against Russia, and Europe is forced to openly support them. The makeup of Anglo-Saxons and Europeans doesn’t represent the entire world; the entire world is watching. Now there’s no Hitler to screw everything up; there’s no one to blame now. The U.S. and other “British people” will screw everything up for themselves this time.

About Artem Belov 36 Articles
Artem Belov is a TESOL-certified English teacher and a freelance translator (Russian>English and English>Russian), currently residing in Russia. He is working on a number of projects, including game localization. You can reach him at belov.g.artem@gmail.com