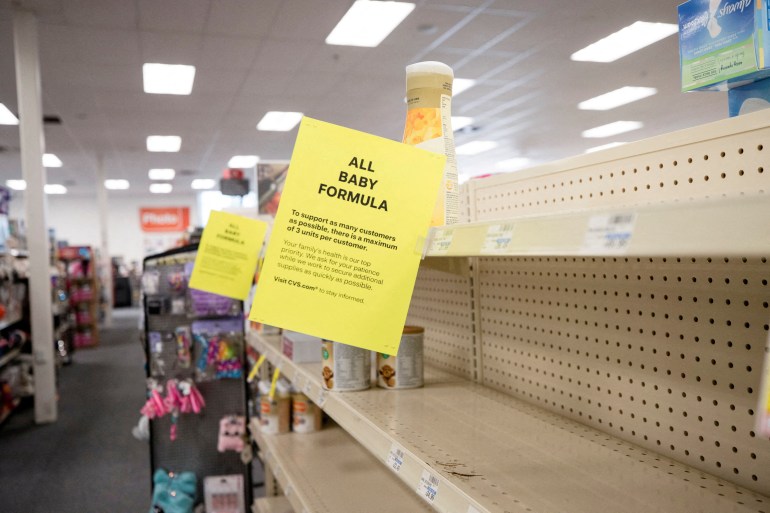 Infant formula has been in short supply for months. The shortage is now developing into a national crisis. Critics see this as a bitter irony.

Recipes, handicraft tutorials and nutrition tips are very popular with parents of small children, on Instagram or Tiktok as well. However, for several days American users have been passing around a recipe from the 60s that is causing pediatricians distress: 13 ounces condensed milk, 20 ounces boiled water and two level tablespoons of corn syrup. It yields six bottles of homemade “baby milk” a day. However, the reason for this is not an obscure retro trend among social moms. It is sheer desperation.

For months, infant formula has been in short supply in the United States, but now the shortage is developing into a national crisis. In the meantime, stock in grocery stores has sunk by 40%, images of emptied supermarket shelves are circulating through the media and grocery chains are limiting quantities when infant formula is purchased.

In a country where one in five babies receives formula just two days after birth and only a third of all infants over three months are fully breastfed, this is creating panic. Parents are reporting shopping trips to neighboring states and attempting to save formula through dilution or by working with a substitute. Since then, even the White House has intervened: President Joe Biden announced steps to ensure supply.

However, there are all sorts of political and economic obstacles standing in the way of this. The infant formula crisis is a prime example of the problem that is growing from two very American characteristics: the country’s pronounced food protectionism and the lack of labor protections for many mothers.

The lack of infant formula is part of the first collateral damage in the United States in the pandemic-affected supply chain drama. In early 2020, it was on almost as many panic shopping lists as toilet paper, which brought with it massive fluctuations in price and problems with production plans. Only products from American producers are allowed on the American market; unlike in Europe, formula must contain iron, for example.

The most important producer, Abbott Laboratories, also offers special formula for babies with health problems. However, after a bacterial outbreak in a plant, Abbott had to recall its products in February and close the plant. The shortage cannot be offset even if some American parents secretly import brands like Holle or Hipp from Europe, which is not allowed and is expensive.

The infant formula crisis is hitting low-earning Americans especially hard. They, in particular, often rely on cheap formula for their children because they have no ability to breastfeed without maternity leave and postnatal care. Critics see it as bitter irony that on top of Republican-driven abortion bans there is now a infant hunger crisis in one of the richest countries in the world. All the more so because identified Republican or Christian-fundamentalist social media users are entering the debate. Their tips sound like this: “Why don’t you just try breastfeeding!”