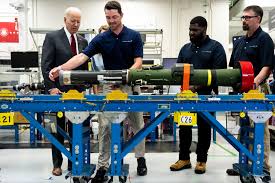 Joe Biden revealed just how important the conflict in Ukraine is for the U.S. It’s more important than World War II, but comparable in its importance to World War I and the American Civil War. Not only Biden’s words, but also Washington’s actions confirm that the U.S. is betting on Russia’s military defeat. That’s a very high-stakes bet for the U.S.

An American stereotype paints Alabama as a state where people live in trailers due to poverty, shoot possums out of boredom and beat up their wives in a drunken stupor — basically, a godforsaken province with a rough moral code. Yet it is not populated by rednecks, but by the working class, which follows the Southern tradition to vote conservative.

These are unaccommodating places for a Democratic politician, and Biden in particular should not show his face around there given his record-breaking low approval rating. However, the U.S. president spoke to workers at a factory in Alabama. It’s unclear how we should assess the speech; was it yet another “Bidenism,” like his handshake in midair, projecting the main objectives of his administration.

In particular, the White House leader said that the ongoing crisis in Ukraine is one of the turning points in history that occur no less than once every six to eight generations.

The claim seemed well placed. The factory in question belongs to Lockheed Martin, which manufactures Javelin anti-tank missile systems that the U.S. is supplying to Ukraine’s armed forces.

In other words, Biden delivered a speech before a rare audience in America — the people who are directly benefiting from the crisis in Ukraine. Most other social groups, including those in Alabama, merely face accelerating inflation and a recession because of this crisis.

In the same speech, the U.S. leader admitted that U.S. participation in the Ukrainian conflict “isn’t going to be cheap.” Given the situation, Biden’s need to exaggerate the magnitude of events and the importance of Ukraine (a country that only a rare Alabama resident could point out on a map) is understandable.

Being an older man, the president just overdid it; bit off more than he could chew.

One generation is usually defined as people who are in their most economically active age, approximately a 20 to 30-year period. As such, what’s going on in Ukraine for the U.S. (or even for the entire world, since Biden hasn’t clarified that) is the most significant event for at least 140 to 240 years.

So, nothing more significant has happened since the American Civil War. Moreover, nothing more significant has happened during Biden’s life in particular, and he was born back in the middle of World War II. The creation of a nuclear bomb, the Cold War, the collapse of the Soviet Union, the ascension of China, the events of 9/11 — all of these are just minor events that happened to occur during his lifetime.

We could indulge our sense of irony for a long while, since Biden’s trademark absent-mindedness nourishes such a conclusion. But we should consider whether the establishment in the U.S. really places such epochal significance on the special operation of the Russian armed forces, as well as on the U.S. participation in resisting them.

The Strauss-Howe generational theory is widely known in the U.S. It’s not really scientific but heavily promoted. It boils down to the claim that the history of the continent’s colonization and the founding of the U.S. has a cyclical nature. Every cycle lasts an average of 95 years and is split into four generations that follow one another in a determined sequence — from the generation of awakening to the generation of crisis.

On the basis of that system, the American Civil War ended eight generations ago. World War I started six generations ago — its “generation of heroes” determined America’s place in the world as a dominant power.

The crisis period for Americans who lived four generations ago lasted from the Great Depression to the end of World War II. A new cylcle followed, which is now coming to an end. The current generation is fourth in this cycle. It’s a crisis generation — the generation of the war on terror, the collapse of markets, the pandemic and the struggle to preserve Pax Americana.

It has been implied that the U.S., gathering all its power, will once again emerge from the crisis victorious, which will mark a new era of American greatness. The role of the defeated is thus preserved for us or, for example, for China.

The current Democratic Party elite are the kind of people who really take this seriously. There are apparent signs that Washington doesn’t plan to spare any money on its participation in the proxy war in Ukraine; the sheer volume of aid already approved for allocation is 10 times greater than the aid allocated over the past six months and has reached $33 billion.

The U.S. has also approved a parallel project bluntly named lend-lease, referencing the imperial over-reach at the end of the previous cycle between 1939 and 1945. At its core, it really is similar to the aid program that supported the Soviet Union and the Allies in wartime — the weapons will be supplied to the armed forces of Ukraine for free, and payment will be settled sometime afterward. In short, something will be returned later, something will be exchanged, something will be paid for in installments, but all of this will be settled after their mutual (mutual indeed!) victory.

This is another U.S. bet (and this time it’s really big) on the military defeat of Russia and on the depletion of Russian resources as Ukraine is pumped up from the outside (with anything but manpower; hence it is called “the war until the last Ukrainian”). This bet will hardly be America’s last: the importance of this game as a whole for Washington, on the basis of the generational theory, is similar to the U.S. reaching new heights of industrial development through the crucible of the American Civil War and its path to world domination through its participation in World War I. If Biden’s words about six to eight generations reveal a similar attitude toward making history right now, it means that Washington is not underestimating Russia as it has before. Whether intentionally or not, the current theme of the U.S. president’s speeches is that it “won’t be easy,” “isn’t going to be cheap,” “it’ll take a long time,” but “it’s worth the price.” The U.S. is at war — and it’s committed to winning it.

There’s only one way in which the U.S. still underestimates us. Washington still believes that the U.S. will win the standoff in Ukraine, it just has to.

In fact, Russia has to win — and it truly will win. No matter how important victory is for the U.S., it’s much more important for us.

About Artem Belov 24 Articles
Artem Belov is a TESOL-certified English teacher and a freelance translator (Russian>English and English>Russian), currently residing in Russia. He is working on a number of projects, including game localization. You can reach him at belov.g.artem@gmail.com