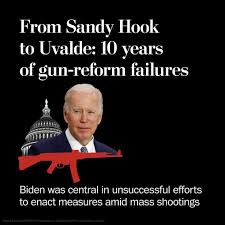 Every time there is a tragedy, gun control is called for, then the incident disappears before you know it. Such repetition must end. The shooting at an elementary school in Texas, in the southern part of the U.S., was a tragedy. This time, the U.S. must take steps to prevent a recurrence.

In addition to 19 children, two female teachers who tried to protect them were also killed in the incident. According to the report, one of them, Irma Garcia, 48, was found by police officers holding a child in her arms who was barely alive.

Her death must have been a shock for her husband. Two days after the incident, Garcia’s husband also died, of a heart attack, leaving their four children behind.

The perpetrator,* an 18-year-old boy, was carrying an AR-15, a semi-automatic rifle with high power to kill. It was also used in the worst shooting incident in history in Las Vegas, Nevada, in 2005, in which 58 people died.

President Biden said, “The idea that an 18-year-old kid can walk into a gun store and buy two assault weapons is just wrong.” But such lethal weapons should be banned altogether.

There are 400 million firearms circulating in the U.S., more than the total population of the country. According to a private group working for gun control, more than 40,000 people lose their lives to guns, including by suicide, every year.

Furthermore, when the COVID-19 pandemic was in full swing in 2020, the number of guns sold exceeded 20 million, the highest number ever recorded. Concerns about the deterioration of public safety caused by the pandemic have been noted.

The Second Amendment of the U.S. Constitution permits the possession of guns for self-defense, stating that “a well regulated Militia, being necessary to the security of a free State, the right of the people to keep and bear Arms, shall not be infringed.”

Opponents of gun control use this constitutional clause as a shield, but times are different from the early days when the country was founded and police forces did not yet exist.

Opposition from the National Rifle Association, a lobbying group, has also been a barrier. Its influence in political circles is so strong that legislation such as stricter background checks for gun purchasers has not progressed.

Biden lamented, “these kinds of mass shootings rarely happen anywhere else in the world.” The U.S. needs to be aware of this anomaly.

* Editor’s note: The acts described here were allegedly committed by the 18-year-old shooter who died in the attack on the primary school.