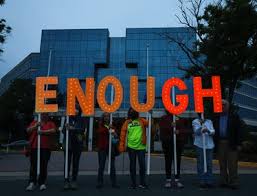 The murder of 19 children, 9 to 11 years old, and two of their teachers won’t alleviate the morbid fear some elected officials and their voters are feeling with regard to stricter gun control.*

There have been proliferating reports, texts and testimony since the horrifying massacre in Uvalde, Texas. They all say the same thing: Despite this latest tragedy, nothing will change. Access to guns will remain unchanged in the United States.

Not only is this reading correct, but it reveals a dose of realism gained by analysts and commentators after a decade of senseless tragedies, from Sandy Hook to Uvalde. All the efforts of the last 10 years to tighten gun control have failed.

That said, it’s worth a closer look at the theories used to explain why it is immensely difficult to legislate the use of firearms, particularly with respect to the money and power of the National Rifle Association.

If the NRA’s position resonates with its members and with elected Republican officials, it is not simply because the NRA “buys” Republican politicians. Republicans and NRA members widely understand the NRA’s message because it touches on two fundamental phenomena observed in American society: mistrust and tribalism.

The Effects of Losing Trust

The academic journal Political Behavior revisits in its June issue a piece originally published in July 2020 by a group of four political scientists from the State University of New York at Stony Brook. It shows just how much broken trust in government institutions drives voters to oppose even the most modest of gun control proposals.

While these voters may initially claim to be open to one form of limited gun control or another, they are quickly overcome by the fear that one restriction might lead to an inevitable slippery slope of much stricter rules they’re opposed to. The NRA appeals directly to this cognitive and emotional reflex.

For example, just weeks after the Sandy Hook massacre in 2012, when 20 6 and-7-year-olds were killed along with six adults, as Congress was considering the possibility of universal background checks prior to the purchase of a firearm, the president of the NRA argued, “They’ll turn this universal check on the law-abiding into a universal registry of law-abiding people.” Because millions of voters doubt that the government will stick to these measures, the message works. There is no regulation capable of getting the kind of broad popular support that would make it into law.

When Voters Band Together

The other social phenomenon hindering the passage of stricter gun control laws is something political scientists call “triage.”

Traditionally, the two political parties in the United States consisted of a wide range of ideologically diverse voters. In other words, many voters on the left might vote for the Republican Party, much like those on the right might support the Democrats.

But, in recent years, voters have become increasingly more ideologically homogeneous. Voters on the left have banded together within the Democratic Party, and those on the right with the Republicans.

With this triage comes, in a context of pronounced political distrust between Republicans and Democrats, a propensity to believe that if one gives an inch, the opposing party will take a mile.

In the case of gun control, this means that Republican voters who favor certain Democratically-sponsored measures are reluctant to get behind them. In a dynamic where one political tribe is increasingly cut off from the other, any cooperation becomes more difficult — and any rule closely associated with one tribe is more likely to generate natural resistance from the other.

Whether motivated by a distrust of government, or by political tribalism, the response is ultimately the same: with Republicans, the fear of a slippery slope has paralyzed people from taking any action necessary to bring these massacres to an end.

*Editor’s Note: The mass killing in Uvalde, Texas was not proved to be murder, which is a crime in the United States that must be adjudicated in a court of law.

About Reg Moss 59 Articles
Reg is a writer, teacher and translator with an interest in social issues especially as pertains to education and matters of race, class, gender, immigrant status, etc. He is currently based in Chicago.