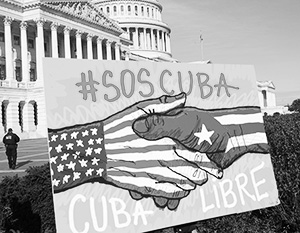 The White House eased its sanctions on Cuba — a step that was met with heavy criticism from the American political elite. Why did the Biden administration suddenly start flirting with Cuban leaders, what answer can we expect from the Cubans, and how does it directly involve Russian foreign policy?

The Biden administration recently was hostile to Cuba once again. Washington excluded Cuba (along with Nicaragua and Venezuela) from the Summit of the Americas, which took place in Los Angeles. With that, the U.S. made it clear that it considers the Cuban dictatorship a real outcast.

However, American human rights defenders, conservatives and other critics of Cuba’s leadership are very dismayed by Joe Biden, since Biden simultaneously offered economic benefits to Havana. While the U.S. refused to invite Cuba to the summit, it loosened its sanctions regime against the island of freedom, which makes it easier to transfer money and allows a range of American citizens to visit Cuba.

As Secretary of State Antony Blinken said, these measures were implemented “in support of the Cuban people and in the foreign policy interests of the United States.” You’ll remember that this is the foreign policy Biden promised to build on, a policy designed to strengthen the protection of human rights.

It’s not surprising that the American political elite strongly criticized the move to ease sanctions. “Whatever the humanitarian impulse behind the Biden administration’s Monday announcement … the timing couldn’t be worse … Cuba’s regime may be in the most precarious state of its 63 years in power. The economy has collapsed, and hero worship of Fidel Castro is as dead as he is. The July 11 uprising last year, when tens of thousands went to the streets and shouted for freedom, exposed the contempt Cubans have for their government … Why would Biden lift pressure on the Cuban regime now?” the Wall Street Journal asked. The Democrats are outraged as well.

Increasing travel to Cuba “risks sending the wrong message to the wrong people, at the wrong time and for all the wrong reasons,” said influential Sen. Robert Menendez, who comes from a family of Cuban immigrants who fled the Castro regime. “Those who still believe that increasing travel will breed democracy in Cuba are simply in a state of denial.”

However, the Biden administration is not in a state of denial, quite the opposite. It is attempting to combine the defense of human rights with its foreign policy needs.

The point is that for American diplomacy and its foreign interests, Cuba is not just a small island hundreds of miles away from the shores of Florida, but it is the key to all of Latin America. This region is home for the U.S., its backyard, where players hostile to Washington — Moscow, Beijing and even Tehran — have recently begun to strengthen their positions.

“For example, today to all countries of Latin America (excluding Mexico) China has already become the main trade and economic partner. China, not the U.S., is the main trade partner of the countries that were traditionally considered the American underbelly,” Dmitry Suslov, deputy director of the Centre for Comprehensive European and International Studies at the Higher School of Economics, told Vzglyad. “In the current circumstances, the U.S. will be as active as ever in opposing Russian and Chinese influence in Latin America. Such an intention is in plain view at, for instance, the Summit of Americas, taking place in Los Angeles at the moment. On the other hand, the U.S. doesn’t have the resources necessary to marginalize Russia and China and to push them out of Latin America.”

To push them out of the region, the U.S. would need to create a positive image in the eyes of Latin America. An image of a country that helps, not one that suppresses. And here is where the issue of the nearly 50-year embargo on Cuba comes back around for the Americans. Millions of left-oriented people in Latin America sympathize with Cuba, including politicians and even heads of state.

“Imagine you can’t buy food and people can’t buy basic goods because the company selling them could be sanctioned. That isolation … is a genocidal policy,” said Mexican President Andrés Manuel López Obrado.

As president, Barack Obama understood that (a) the U.S. needs to fight for Latin America, and (b) it can’t be done without normalizing American-Cuban relations. That’s why, as he said, the U.S. “end[ed] an outdated approach” and “cut loose the shackles of the past” — in partially lifting the Cuban blockade.

Obama allowed Cubans to receive money transfers from the U.S. (in 2019 the total amount of these transfers, by some estimations, reached $3.7 billion — not counting cash transported by hand) and allowed U.S. citizens to visit the island as tourists.

He didn’t do it just to build up his image, but also to change the Cuban regime in a meaningful way. Outside financing, backed by an influx of customers (during Obama’s term, there were 200 flights per week from the U.S. to Cuba), created perfect conditions for developing small business in Cuba, which in turn led to the emergence of the middle class, which demanded democratization.

The problem was that Obama’s approach was not shared by his successor Donald Trump, due particularly to the sentiment of Trump’s supporters (the majority of whom were against cutting the Castro regime any kind of slack). Subsequently, Trump sharply increased sanctions on Cuba. There was a $1,000 limit on money transfers by the members of each family once every three months. Cuba again made it onto the U.S. State Sponsors of Terrorism list, and American tourists were banned from visiting the island.

Trump introduced almost 200 new restrictions — canceling what he called a “weak, pathetic, one-sided deal with the Castro dictatorship.” As a result, the amount of money transfers fell to $1 billion in 2021, and the stream of visitors dwindled to 60,000.

Due to Trump’s sanctions and COVID-19, the Cuban economy is facing a serious crisis. And Cubans, naturally, blame America’s inhumane policy.

“In the case of Cuba, it’s not just the consequences of the pandemic, it’s the consequences of the reinforcement of the policy of maximum economic pressure of the U.S. toward Cuba,” said Cuban Vice Minister of Foreign Affairs Josefina Vidal. America is already reaping some of the fruits of these sanctions, not only with respect to its public image, but with respect to an influx of immigrants. According to statistics compiled by the U.S Customs and Border Protection agency, 32,000 immigrants from Cuba arrived at the U.S.-Mexico border in March — that’s approximately twice as many as in February. And according to a law passed in 1996, Cubans who spend a year in the U.S. can apply to become permanent residents.

That’s precisely why, after many months of consideration, the Biden administration decided to restore Obama’s policy, and why Biden eased sanctions, canceled the limit of $1,000 in money transfers once every three months allowed regular transfers to people other than family members. The administration has also approved group educational travel and authorized charter flights to locations beyond Havana — but only for purposes of group education. Americans are still prohibited from touring the island.

Unsurprisingly, Cuba describes these measures as positive but limited steps. Nevertheless, it would be naive to expect something more out of the Biden administration. The White House has only begun to initiate the its policy, and have made it clear the U.S. is not stepping away from the human rights issue. State Department spokesman Ned Price criticized Cuba on June 6 for its prosecution of two artists, which Washington believes is nothing short of “criminalizing the freedom of speech and artistic expression in Cuba.”

Meanwhile, Washington is waiting for Havana to respond. The United States is calling on its Cuban colleagues to revive talks about restitution to U.S. citizens property that Cuba nationalized during the revolution. It’’s estimated that the 6,000 applications that have been prepared and already filed would cost Havana approximately $2 billion in restitution payments. In return, Cuba is calling on the U.S. to make restitution for losses the island suffered during the blockade, losses that Havana estimates come to between $100 billion and $850 billion.

It will be extremely difficult, of course, to negotiate from such positions. “The Cubans don’t trust the U.S. at all, and the U.S. clearly doesn’t trust the Cubans at all,”* said Scott Hamilton, the former chargé d’affaires to Cuba. However, to reiterate, the result is not as important for the Biden administration as the process of restoring the relationship itself. It’s an act of opening the lock on Latin America with a Cuban key.

About Artem Belov 50 Articles
Artem Belov is a TESOL-certified English teacher and a freelance translator (Russian>English and English>Russian), currently residing in Russia. He is working on a number of projects, including game localization. You can reach him at belov.g.artem@gmail.com