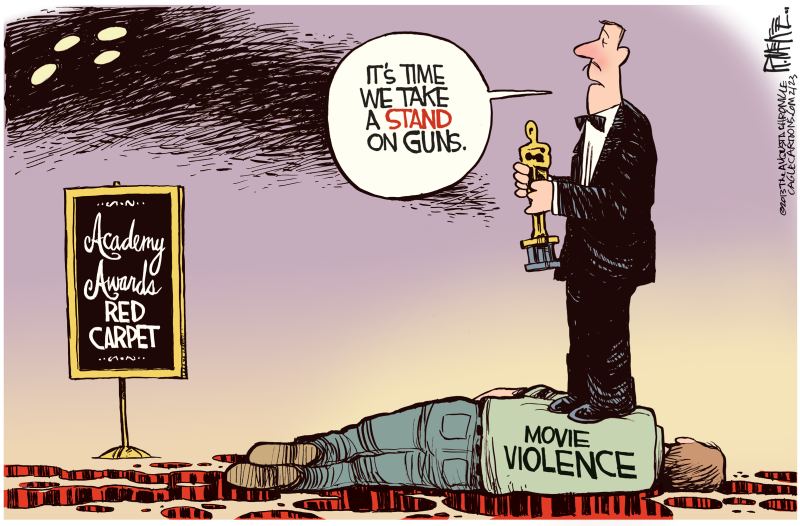 And how do some American artists react? They call for more gun control … on screen!

Well, my friend, the BIG problem is not that guns are sold like popsicles on every street corner, no. The problem is that we see too many guns when we go to the movies. Oh dear!

To solve the obesity problem in the United States, why don’t we control the number of hamburgers and chocolate cakes we see on the screen while we are at it?

Two hundred artists, like Julianne Moore (whom I love) or J.J. Abrams (whom I also love) signed a letter that I don’t love at all. “We are not asking anyone to stop showing guns on screen. We are asking writers, directors and producers to be mindful of on-screen gun violence and model gun safety best practices.”

Cinema is an art form, produced by creative minds. Each time I hear talk of “controlling,” “moderating” or “interfering” in the creative process, it makes me cringe.

I do not go to the movies to:

2 – take a class on propriety;

“Model gun safety best practices” — Is this a joke? Movies are not there to “model” anything.

You really must have an urgent need to signal how virtuous you are to co-sign a letter that proposes turning art that sometimes can be subversive and disturbing into “Care Bears” propaganda.

Above all, you must have your head buried in the sand to think even for two seconds that if you see a character on screen put the safety catch on their gun, it’s going to change anything when in the rest of society, guns are as readily available as candy.

The first sentence of the letter signed by these 200 movie stars left me dumbfounded. “Guns are prominently featured in TV and movies in every corner of the globe, but only America has a gun violence epidemic.”

Well, that’s exactly the point! It is proof that American laws must change, not American movies or TV series.

An Offer You Can’t Refuse

I can well imagine what “The Godfather” would look like if it were produced today.

One of the classic scenes in the film takes place after Paulie’s murder, when Clemenza says to Rocco, “Leave the gun — take the cannoli.” (an improvised phrase by actor Richard S. Castellano).

In 2022, the Benevolent Committee Responsible for Scenario Review* would dictate that the line read: “Don’t leave that gun on a car seat, you never know who might get their hands on it, a child might kill an innocent person. And most importantly, leave those pastries, they have way too much saturated fat.”

Can’t mess around with the Mafia of correctness.

*Editor’s note: Though accurately translated, the existence of such a committee could not be verified.

About Mireille Dedios 56 Articles
I’m an independent French translator based in the Boston area, certified by the American Translators Association (French into English). I honed my translating skills as part of the executive teams of various French and US companies, including State Street Corporation, where as a member of the Public Relations team, I tracked the news media globally and translated press releases into French. I enjoyed this work tremendously and continue to look for opportunities combining translation and news coverage, culture, history and international relations.