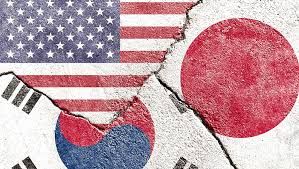 Russia’s invasion of Ukraine could potentially impact the Indo-Pacific region, raising fears that an intensified arms race and show of force might unilaterally change the current status quo.

An Asian security council meeting recently took place in Singapore, with Japanese Minister of Defense Nobuo Kishi, U.S. Secretary of Defense Lloyd Austin and South Korean Minister of National Defense Lee Jong-sup in attendance. It is noteworthy that the cabinet members who are protecting the national security of democracy-minded countries are coming together to share an understanding of the current regional situation and confirm their cooperation.

The pressing issue is how to deal with North Korea, which has increased its ballistic missile launches, and according to observations, is planning to conduct a seventh nuclear test.

A joint statement from the three cabinet members raised concern that North Korea’s provocations “pose a grave threat to international peace and stability,” and announced plans to resume joint training exercises between Japan, the U.S. and South Korea in response to the ballistic missile launches.

The last joint training exercises took place in 2017. Meanwhile, the relationship between Japan and South Korea has cooled due to friction over the South Korean Supreme Court’s decision regarding conscripted laborers, and an incident in which a Japan Self-Defenses Force patrol plane irradiated a South Korean warship. The U.S. has urged both countries to mend the relationship.

Even though there are problems related to historical awareness and trade, the necessary cooperation is growing. We hope the parties stay the course.

Regarding moves by China, which is the biggest unresolved problem, the joint statement emphasized the importance of peace and stability in the Taiwan Strait. This is the first time that defense ministers from Japan, South Korea and the U.S. have all spoken jointly about Taiwan.

Chinese President Xi Jinping, who is eying a unification with Taiwan, has opposed such references to Taiwan as “external interference” in an “internal affair.” Because it is likely that China will use the enhanced relationship between Japan, the U.S. and South Korea as an excuse to increase pressure on Taiwan, the cabinet members of all three countries also met in conference with Chinese Minister of National Defense Wei Fenghe. You could say that this meeting was a valuable chance to convey to China the anxiety spreading throughout Asia, as well as to warn China not to cause trouble.

Kishi criticized the frequent incursions by Chinese ships into territorial waters surrounding Okinawa and the Senkaku Islands, as well as the joint Chinese and Russian flights by strategic bombers in the vicinity of Japan, decrying them as a “show of force” toward Japan and calling for China to exercise self-restraint.

The meeting appeared to end without reaching any agreement. Still, if there is no attempt at any mutual understanding, it will amplify distrust and we will not be able to eliminate the possibility of intermittent military clashes. Even if no consensus is reached, it is necessary to engage with each other about concerns and make an effort to clear up misunderstandings to avoid a crisis.

While there are multiple nuclear states in Northeast Asia, there is no framework for discussing arms reduction and control. To move toward detente, we must continue dialogue like this among cabinet members.