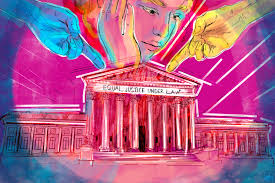 There is no end to it.

The Supreme Court of the United States has just buried Roe v. Wade and we find ourselves, again, having to bring up Donald Trump because there is a direct link between his presidency and this ruling that is as regressive as it is distressing.

If abortion is outlawed in half of the U.S., it will be because a populist billionaire altered the balance of the highest court in the land.

If women in the U.S. have just received a historic “slap in the face,” to quote House Speaker Nancy Pelosi, it is because Trump was able to nominate three ultraconservative justices to the Supreme Court.

If the U.S. has just turned the clock back 50 years, it is because those justices were chosen exactly with the hope they would shred Roe v. Wade and more. The justices may have just opened a Pandora’s box. More on that later.

The court now finds itself with six conservative and three liberal justices. And those nominated by Trump make up the bloc that crushed Roe v. Wade. These are justices who, with the exception of Chief Justice John Roberts, seem not to care in the least about the impact this ruling has on the legitimacy of the court.

President Joe Biden was indeed right to say it was a sad day for the country AND for its highest court. The decision on Roe is one of the worst rendered in recent years by the Supreme Court. It is on the wrong side of history in this fundamental issue.

It is also a decision that shows contempt for the position of justices who, in recent decades, have endeavored to reflect the evolution of American society, notably on the question of equality between men and women. It is worth noting, too, that two-thirds of Americans did not want to see an end to Roe v. Wade.

Lastly, it is a decision that leaves Americans with the impression that the highest court in the land is no longer independent.

The impact of overturning Roe v. Wade has not yet been measured, but what is known is that hardships will multiply from one end of the country to the other, and that poor women, again, will suffer the most. One can also expect that, in the short term, other hard-won rights in recent decades will come under attack with renewed enthusiasm by the religious right and its Republican allies.

This is especially likely as Clarence Thomas, one of the most conservative justices on the Supreme Court, suggested as much in a concurring opinion last Friday. Thomas even named certain decisions that he believes should be reconsidered because they rest on the right to privacy, which was the basis for the 1973 decision to legalize the right to abortion across the country. He spoke of rulings rendered on marriage and sexual relations between persons of the same sex, as well as the right to contraception.

In short, overturning of Roe v. Wade is an earthquake that will cause considerable damage and definite aftershocks, some of which may affect rights other than abortion. And countries that benefit from crucial rights such as abortion must view this earthquake as a warning.

In recent decades, there has been a tendency to forget the extent to which we must never take rights and liberties for granted.

Furthermore, in this era in which voter participation is in free fall in many Western democracies, it is worth remembering the extent to which elections have consequences. The journey back in time imposed on Americans, a legacy of the Trump years, is a cruel reminder.

About Reg Moss 79 Articles
Reg is a writer, teacher, and translator with an interest in social issues especially as pertains to education and matters of race, class, gender, immigration, etc.