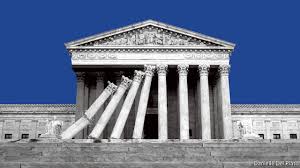 All doubt — if any still existed — has been dispelled: The Supreme Court of the United States has restricted women’s rights to make decisions about their bodies, their reproduction and consequently their right to abort. In a controversial decision that, in legal terms, qualifies as confusing and even unconstitutional, the supposed rights of a fetus have been put before those of a person. This flies in the face of more than five decades of fighting to maintain the protections in Roe v. Wade. Case law has protected the right to abortion since 1973; based in part on the 14th Amendment, from which the right to privacy of all individuals is derived, and which provides equal protection under the law. The Supreme Court decision could open the door to restricting other longstanding controversial human rights protections, including one of humankind’s most valued freedoms, the right to make decisions about one’s own sexual orientation and one’s own body. In short, the decision confirms a regression to the Middle Ages, promulgated by a group of individuals who, when all is said and done, make up the most conservative Supreme Court this country has seen in many years.

The decision will also be a reference point for judging the extent of Donald Trump’s legacy, stemming as it does from his nomination of three conservative justices who upset the precarious equilibrium that gave the Supreme Court its iconic image of impartiality and balance between two opposed ideologies. Trump himself celebrated the Supreme Court’s decision, claiming he was its architect given that he named the three justices who joined three other conservative members of the bench in possibly destroying the fragile trust that millions of Americans still had in the Supreme Court.

It is also a triumph for one of the most Machiavellian legislators who has ever passed through the Senate, Mitch McConnell. McConnell manipulated the makeup of this Supreme Court even before Trump’s presidency, when, as Senate majority leader, he prevented consideration of President Barack Obama’s nominee to the court, Merrick Garland. Garland could have played an important role in balancing the bench.

The fight will now pass to each state. The Supreme Court relinquished the right to make decisions regarding the lives of millions of citizens, women foremost, who have aspired to live in a less prejudiced, more modern, more tolerant and less sectarian society. Half the states, of which the majority are Republican, have already enacted laws restricting abortion, in defiance of the 1973 decision that made it a constitutional right. Now, with its decision, the Supreme Court has backed a longstanding ambition to fortify conservatism in the country. The signs are not at all positive for the greater part of society, which believed it was following in the footsteps of their most enlightened ancestors. Now comes a discouraging and pessimistic warning that time has not only stopped, but turned backward.

On the long list of decisions that the Supreme Court could deliver in the near future to cement conservatism are those around same-sex marriage, affirmative action, commercial and financial deregulation, immigration, climate change, and so on. These are only some of the issues that the most rabid conservatives will attempt to cash in on, faced with a nation that dares to defy the ruthless Huns who are trying to convert the country to a medieval kingdom.

Paradoxically, the Supreme Court’s decision has opened the possibility that the Democratic Party will restore a leadership that, under different circumstances, could be lost in November’s midterm elections. House Speaker Nancy Pelosi was right when she declared figuratively that women’s rights will be on the ballot. The only problem for the Democrats will be the place that women’s rights occupy on the ballot compared to the place that inflation and the economy will assume.