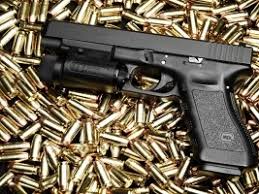 On Thursday, July 21, Port-de-Paix customs officials again carried out a weapons seizure on a boat originating from the United States.

It was the third arms and munitions seizure in the month of July, and the same common denominator links each of these events: the U.S. as country of origin of these instruments of death.

In the U.S., it is both legal and easy to purchase all kinds of guns and ammunition without a special permit. No questions asked. In some states it is easy to procure large quantities of weapons and munitions from the many gun shops and shows, as well as on the black market. With so many firearms in circulation, they are commonplace.

Being in possession of a stockpile of weapons is common except, for one reason or another, when one is caught by the police or one of many agencies in charge of public safety.

It is also very easy to smuggle any shipment of arms and munitions from the U.S. in small quantities, on one or more occasions. For a nation where commerce is king, export is a mere formality. Those who have already witnessed the shipment of containers, cars, drums or buckets in Haiti knows there are no checks on shipments.

One could of course be nabbed by the police, customs officers or any American security agency. One could also be flagged before arrival in the destination country. In such a case, one is arrested for violating various laws at the destination port or, in Haiti’s case, in the U.S.

Apart from groups or individuals under surveillance, law enforcement in the U.S. does not concern itself with protecting foreign countries from those attempting to fraudulently bring in goods or merchandise.

It is up to customs, the coast guard and the police force of each country to monitor its borders. In the case of Haiti, its porous borders are the main issue. Because smuggling is officially allowed to prosper, all kinds of goods, including weapons and munitions, enter with little difficulty — except when customs or police officers decide to do their jobs. With Haiti’s known weaknesses, one wonders how the U.S. — the country of origin and principal trainers and backers of its police and coast guard — can help the island nation.

Since the days when the Hamilton, the famous U.S. Coast Guard cutter that monitored clandestine travel, intercepted canal boats, destroyed them and brought passengers back to Haiti, the U.S. has known how to seal off Haitian waters — since the 1980s, under the presidency of Jean-Claude Duvalier. It has also known how to detect “Haitian” boats on the Miami River and to block shipments of drugs entering into the country. Will they help end weapons and munitions trafficking as well?

Has Haiti officially asked the Americans for help with this matter?

Was it at the request of Haitian authorities that the U.S. opposed a Chinese proposal to impose an embargo on weapons in Haiti during the renewal of the United Nations Integrated Office in Haiti mandate?

Does the U.S. have a better plan?

What about the millions of dollars in aid announced in January to strengthen the Haitian National Police?

As the principal backer of the Haitian government, no matter the chief executive, the United States is well aware of the issues. Will they at last begin to truly help Haiti, or will they continue to make agreement on the agreements a prerequisite?