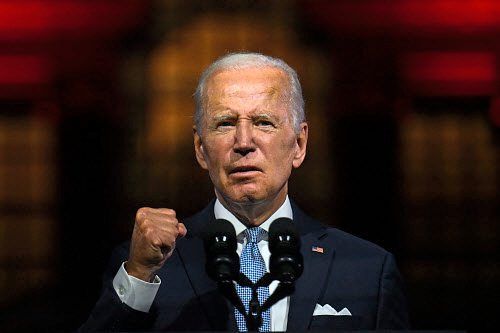 The fact that the U.S. president no longer handles things with kid gloves but instead calls them for what they are is a good thing. His dilemma, however, of having to preserve the peace and defeat Trumpism remains.

Joe Biden is now calling things for what they are. Not for the first time, it must be said. But once more and this time rather explicitly, and certainly more profoundly than before. Admittedly, he has not repeated his assessment from last week during his speech on Thursday evening in Philadelphia that Trumpism is a sort of “semi-fascism.” It’s correct, but also a useful point for the Republicans to counterattack. This time, he warned of a split, intimidation, political violence and the end of democracy in the U.S. The culprit: Donald Trump and his followers. Biden has now given up referring to him as “the former guy” — as if he no longer played any kind of role.

All of this is correct, and the fact that the U.S. president is speaking openly rather than hiding behind the misguided hope of being able to unite the country without any counterattacks is a good thing.

At least, however, he has not entirely given up this desire. Still, his assessment that “not even a majority” of Republicans espouse Trump’s Make America Great Again ideology is probably false. “This is not who we are,” Biden then added, a saying that is also known in Austria. Just like in this country in the past, the same applies to the U.S.: The concern that “this” is actually who “we” are, or at least a rather large group, is perhaps not unjustified.

And that is exactly where the danger lies: Biden cannot free himself from the conflict of simultaneously having to unite the country and preserve the peace and, on the other hand, having to take action against the increasingly dangerous growth of Trumpism with necessary force. Unfortunately, it really is a dilemma with no satisfactory way out.

So once again, only the least bad remedies remain: defeating Trumpism at the ballot box and taking action against illegality through the rule of law. The latter is underway but risks a violent response. Those responsible for the attack on the Capitol can be prosecuted, but unfortunately they constitute only a minority of those who are prepared to deploy violence. If Republicans are now expressing fears that the FBI’s investigation into Trump could lead to unrest, then that is also a veiled threat. One cannot give in to them.

The first point remains. The situation at the polls has recently improved for the Democrats. Many from the political center — and indeed also some Republicans — felt that the Supreme Court’s decision to withdraw the right to abortion was excessive and extreme. That weakens voter turnout, at least on one side. At the same time, the Democrats in the House of Representatives and the Senate have somewhat succeeded in what they were elected for: The infrastructure and climate packages that Biden had promised in his campaign are all wrapped up — albeit truncated. Up to now, the party had given the impression of only quarrelling. The fact that it is now proving it can solve problems is significant.

Because even if Biden now positions himself and his party as protectors of democracy in the election campaign, it is unfortunately not enough to win the election. The Democrats must also deliver something tangible — a lot rests on it.