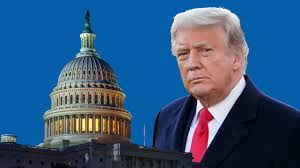 The Jan. 6 investigative committee has presented grounds for an indictment against Donald Trump and has even subpoenaed him. Nevertheless, others must hold him accountable.

It is the finale of all finales, a big bang that threatens to fade away. The Jan. 6 investigative committee unanimously decided on Thursday that Donald Trump should testify under oath about the role he played in the violent attack on the Capitol. However, the probability of this testimony occurring is small, if not miniscule.

Trump will presumably do everything he can to avoid complying with the subpoena — in the same way during the battle over the classified documents he took home, he used one court after another to prevent the FBI from investigating (in vain, after the Supreme Court itself refused his request to intervene). But even if the former president fails to fend off the subpoena, Trump is buying time to defend himself legally, probably enough to escape giving testimony.

This was the ninth and presumably last open session of the investigative committee. The committee only only weeks left for its work: The Democrats are expected to lose their majority again in the House of Representatives in the midterm elections in November. They would need that majority to reinstate the committee. Its two Republican members would no longer be on the committee, and anyway, the fact that they are pushing to hold Trump accountable has ruined their chances of reelection, as loyal as the Republican Party still is to him.

‘We Have Left No Doubt’

However, the committee members probably don’t expect to actually hear Trump testify either way. Issuing the subpoena, decided in a theatrical culmination at the very end of the more than two-hour hearing, is supposed to exemplify at the very least the fairness of this investigation: The committee has collected so much incriminating evidence against Trump in the past year that he is now getting the chance to defend himself.

The committee could make use of the fact that he probably won’t take this chance. Its work primarily pursues one goal, which recently became even clearer: putting together the pieces of the puzzle that it needs to hold Trump legally accountable for conspiring to “steal” the election and its consequences. Or worded better: to deliver the Department of Justice the perfect indictment even if the committee must formally recommend the matter for criminal investigation.

What could round this off better than an obviously guilty party who dodges questioning — or feels so provoked that he desperately wants to portray his version of events and thus incriminates himself even more? Committee Chairman Bennie Thompson emphasized that Trump is guilty in any case: “We have left no doubt, none, that Donald Trump led an effort to upend American democracy that directly resulted in the violence of January 6th.”

Guilty, because he incited the people who in the end seized for him by force what he wanted against all facts: power. And he did so intentionally at that. As early as July 2020, Trump had allegedly planned to declare himself the winner of the election even if he lost, his former campaign manager Brad Parscale testified. This explains why Trump was so unreasonable when multiple people around him – including his daughter and his attorney general – tried to dissuade him from this immediately after the election. He was very much aware that he had been voted out, but it didn’t suit him. “I don’t want people to know we lost,” he allegedly said to his Chief of Staff Mark Meadows. “This is embarrassing. Figure it out.”

When It Didn’t Get ‘Figured Out,’ He Counted on Violence

When it didn’t get “figured out” with pressure and later open threats — like those made against Vice President Mike Pence — Trump counted on his supporters, who had been systematically riled up for weeks, to resort to violence. As was shown once more in that last hearing, the former president knew both early and in detail that many of those supporters were heavily armed and would not be afraid to assassinate Pence when they answered Trump’s call to Washington on Jan. 6.

As early as the end of December, the Secret Service and the FBI also exchanged information about Trump supporters’ potential for violence, expressing great concern: “Please please take this tip seriously.” It will have to be addressed elsewhere why this didn’t happen and why far too few police officers were protecting the Capitol that day. But the consequences of that are clear: multiple dead, numerous injured, traumatized police officers, some incapable of working and who almost lost their lives that day and whom Trump supporters are still taunting and threatening – as they did outside the hearing.

While the former president watched the whole thing from the White House, sometimes indifferently, sometimes excitedly ,(after his bodyguards had to physically prevent him from joining the mob at the Capitol), the senior members of Congress who had been evacuated tried to organize reinforcements for the security forces and regain control over the building. A usually resolute Nancy Pelosi briefly lost her composure on the phone when she heard that her colleagues who still remained in the Capitol building had to put on gas masks – these are the scenes from this hearing that persist.

‘Cannot Only Punish the Foot Soldiers’

And that’s exactly what it’s all about. Jan. 6 must not be repeated, as Committee Vice Chairwoman Liz Cheney put it, one of a few Republicans who still openly opposes Trump. The court proceedings, which are currently in progress against numerous participants of the uprising at the Capitol, are important, Cheney said. “But our nation cannot only punish the foot soldiers.” Trump must be held accountable to deter people who might imitate what happened on Jan. 6, 2021. And this must happen — Cheney used this term deliberately here — in the name of an entire country whose democratic order is existentially threatened by this conspiracy.

But even if Trump sits behind bars at some point, there is danger that the this country might not avert what Cheney referred to. Hundreds of Republicans who are setting the tone with the lie of a stolen 2020 election could move into Congress this winter as well as state legislatures and election boards — sent there by millions of voters who don’t believe Trump is guilty, but rather is in the right. The investigative success of the committee may have vindicated those who were already convinced of Trump’s guilt, but it has only slightly altered his support from his Republican base, as polls show. Even more importantly, the party’s officials have not distanced themselves from him. If Trump wants to run again in 2024, the nomination is as good as his. And this time, he could have enough willing helpers to bring him to power by force if he loses.

In this sense, the investigative committee may have presented convincing grounds for indictment to eventually prosecute Trump. However, where there is an acute threat of political and social danger, the committee can do little more than demand accountability with a symbolic subpoena, which ultimately must be honored by others.