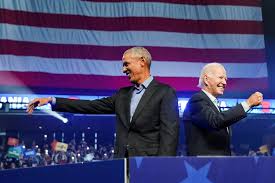 “While the press and the pundits were predicting a giant red wave, it didn’t happen.”

On Nov. 9, President Joe Biden made that remark about the midterm election results. Not attempting to hide his big smile, he also hinted at a reelection bid early next year. As President Biden said, the Democratic Party prevailed in the midterms. What could have turned around the pessimistic outlook that was spreading amid unprecedented inflation rates and Biden’s low approval rating?

American analysts generally point to the power of messages. Pushed into a corner by the growing argument that the administration must be reprimanded for its economic failures, the Democratic Party counterintuitively framed the election as a fight to defend democracy. Analysts say this strategy has shown its power, especially toward the end.

It was Biden who first brought the “defending democracy” narrative to the forefront of the elections. On Sept. 1, in his Philadelphia speech, Biden declared that “Donald Trump and the MAGA Republicans represent an extremism that threatens the very foundations of our republic.” He urged voters to “unite behind the single purpose of defending our democracy.” However, even within the Democratic Party, some complained that the priority should be responding to the economic issues brought up by the Republicans.

Former President Barack Obama, who set out to “save” the Democrats just before the election, brought life to Biden’s narrative. On behalf of Biden, who was shunned by Democratic candidates, Obama spoke at battleground states such as Michigan, Wisconsin and Pennsylvania and, in his unique style, articulated the importance of defending democracy.

The highlight was his joint rally with Biden in Pennsylvania on Nov. 5. Obama, who delivered the final speech in place of Biden, opened it by acknowledging the dissatisfaction of voters tired of high prices. “I understand that democracy might not seem like a top priority right now, especially when you’re worried about paying the bills,” he said. He even mentioned the bitter defeats he experienced in 2010 and 2014. “When I was president, I got my butt whooped in midterm elections,” he said. “Midterms are no joke.”

Instead of directly criticizing Republican policies, Obama appealed to people’s anxiety hidden behind economic issues. “[W]hen true democracy goes away, people get hurt,” he said. To the audience jeering at the GOP, he responded “Don’t boo, vote! … Sulking and moping is not an option.” Instead, he urged voters to fight and “make sure our country doesn’t get set back 50 years.”

Obama’s speech didn’t consist of moralizing statements or outright criticism of the opposing party. Instead, it acknowledged the struggles of voters amid inflation and the Democrats’ own weaknesses, while presenting a universal vision. This is in sharp contrast with former President Donald Trump’s Pennsylvania speech delivered on the same day. Instead of providing a new political vision, Trump poured out criticisms of the Biden administration and arguments for the “Big Lie” claim regarding the 2020 presidential election. His message may have been effective in drawing enthusiasm from supporters, but it was not enough to appeal to undecided voters. Ultimately, the Democratic Party won the support of independent voters, which determined the outcome of the election.

Since the recent stampede disaster in Itaewon, controversy has been at the center of Korean politics. The attitude of some politicians — who have placed blame on the victims’ parents to avoid taking responsibility or attempted to advance their own interests amid the outrage — will only bring division and disgust. It is also difficult to draw broad sympathy if the government keeps on arguing, instead of taking responsibility for national disasters. I hope that the power of politics shown by the U.S. midterm elections can be a lesson for Korean politicians.