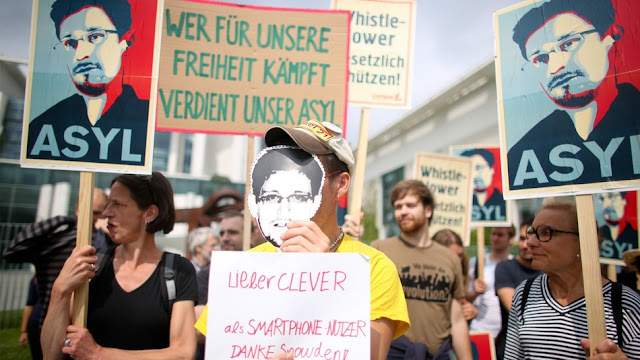 Great! Edward Snowden, defender of the surveillance-free world, wants asylum in Venezuela, after previously having found safety from U.S. prosecution in China and Russia. That is, let’s say, shady, because one doesn’t need long to imagine how those governments would deal with those who betray secrets in Snowden’s style.

Only: Where is the man supposed to go? After all, nations with a dubious reputation were not the first choice of the exposer of the biggest surveillance system in the history of mankind. EU-Europe rejected his request for asylum and even stopped the Bolivian president’s plane because the U.S. believed Snowden could be on board. That those who seek asylum at some point end up wherever it is promised to them does not damage his credibility.

Daniel Ellsberg found the most lucid words this weekend. Many in the U.S. media had compared Snowden to this man, who smuggled the Pentagon Papers out of the U.S. Department of Defense 40 years ago. Ellsberg thereby exposed the U.S. government’s house of lies used to justify the Vietnam War — and turned himself in after a few days. But that, Ellsberg recalls in The Washington Post, was a different U.S.

In his time, he was released from custody on bail, could await his trial in freedom and was allowed to speak with the press. In contrast, Bradley Manning, the young WikiLeaks informant, stands for the U.S. of today. For years he has sat in solitary confinement without contact with the outside world, and his trial before a military court arouses less and less media interest.

The U.S. government demonstrates a will to destroy whistle-blowers that no longer has anything to do with legal prosecution. And European governments remain silent or participate. Only when that changes can one reproach Snowden for temporarily seeking asylum in Russia or even considering Venezuela as a country for asylum.

Until then, it is good that there are such safe havens, even if they themselves don’t care too much about civil rights; just as it was good that [former] Chilean President Michelle Bachelet, as did many of her countrymen, later found refuge in the German Democratic Republic after the 1973 putsch.