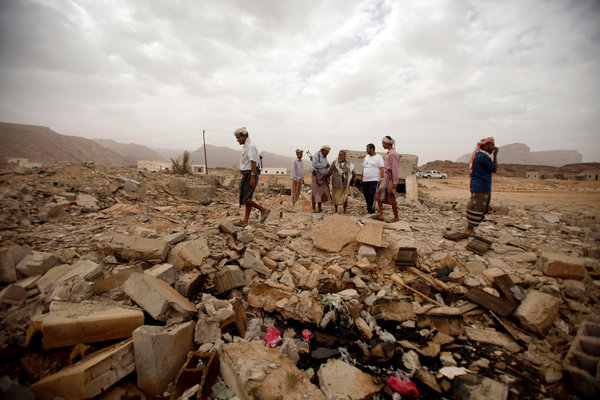 Germany wants no part in the drone war; it wants nothing to do with the U.S. base in Ramstein. Victims from Yemen disagree and are now filing a suit in Cologne.

They came to Khashamir to celebrate a wedding, the relatives from the Gulf states and from all over Yemen. The bin Ali Jaber family is large. One sees them laughing and dancing in pictures and videos on Aug. 28, 2012.

One day later, Faisal bin Ali Jaber, the father of the groom, sat eating dinner when he heard the drone flying in the air. Through the window, he saw the bright light, and then detonations followed: five rockets, detonated by U.S. drones, struck his village in the east of Yemen that day. Their target was three suspected members of al-Qaida on the Arab peninsula. But they weren’t the only ones to die in the attack; so did Salim and Walid bin Ali Jaber, even though nothing connected them to the extremists.

Faisal and two additional family members of the victims are now bringing a suit against the Federal Republic of Germany, which is represented by the Ministry of Defense. Not only the Americans, they say, but also the Germans are responsible for what happened to their family. This coming Wednesday, the administrative court in Cologne will therefore have to consider the role that the U.S. air base in Ramstein plays in the drone war, which is controversial under international law, and whether Germany, as the complainants argue, is in violation of its constitutional and human rights protective duty, if the nation does not stop the activities in question, but instead actively permits them.

Recently, research by Der Spiegel and The Intercept has proven how central the base in Rhineland Palatinate is for attacks like the one in Khashamir – even if “no drones are commanded or controlled from Germany.” The German federal government sought assurance from the Americans on this point and has been repeating tirelessly that it doesn’t want to be involved with any debate about the strategic importance of Ramstein. Correspondingly, it considers the lawsuit of the bin Ali Jabers to be unjustified. For the federal government, the activities of the Americans in the Palatinate are the independent, sovereign actions of a foreign nation that do not lie in its jurisdiction and, what’s more, over which it has no influence.

Faisal bin Ali Jaber and his relatives see this differently: “This base provided information and other logistical support for the flight operations,” he said, and he considers it at least possible that Salim and Walid would still be alive if Ramstein were not made available to the Americans. According to current knowledge, he might be right: In the Palatinate, the Americans maintain the only satellite relay station in range of the operating site of their drone wars, for example, in Pakistan, Somalia or Yemen. The pilots may not be stationed in Germany, but without Ramstein, the attacks would not be possible at the present time: From there, the signals go to the drones, and the real time pictures from the on-board cameras are evaluated and transmitted.

Important for the argument of the complainants is the legal concept with which the Americans legitimize signature kills, like members of al-Qaida. They take their declared "war on terror" after the attacks on Sept. 11 to be global and not limited to regular armed conflicts. So, they believe that they are able to attack anyone who presents a direct threat to the United States. For the complainants, like for many critics of the drone war, there is no basis for this under international law.

Constant Fear of Death from the Air

Moreover, there is great skepticism about the alleged precision and proportionality of the attacks to which, so often, the innocent, like the bin Ali Jabers, fall victim. Salim was an imam; just one week before the lethal drone attack, he criticized al-Qaida in Friday prayer. He called upon the congregation to stand up against the extremists. It's a bitter irony that this, of all things, became his doom. The three men who were the actual targets, apparently classified as alleged terrorists in the USA, wanted to speak to him about his sermon. Out of fear, he had his cousin Walid, a policeman, accompany him in the evening to the meeting behind the mosque. The rockets hit there.

The British organization Reprieve, which also supports the complainants in Cologne, has analyzed publicly available information from independent sources to determine that 1,147 people had to die so that 41 suspected terrorists could be neutralized.

The bin Ali Jaber family lost beloved members. The day after the big wedding was a traumatic experience, and not only for them. “The incident was by any measure a tragedy for all inhabitants of Khashamir and the surrounding villages,” said Faisal bin Ali Jaber. His daughter still gets frightened by loud noises and is afraid in the dark. She is not the only one who lives in constant fear of further attacks. After a decade of the American drone war, many people in Yemen, Somalia or Pakistan know this feeling: Death from the air can hit anyone anytime without warning or explanation, and with German help.

Actually, says Andreas Schüller from the European Center for Constitutional and Human Rights, which prepared the case, one could sue the U.S. – from where the Yemeni family has been awaiting an apology for years. Yet, up to now, the drone war can hardly be touched legally. In Cologne, the victims will at least be heard. Much would be gained if the lawsuit at least brings a little clarity as to how the federal government will react to such overhead attacks.

* Translator note: The German court subsequently dismissed the claim of German complicity in the Yemeni drone killings but did allow complainants to appeal.