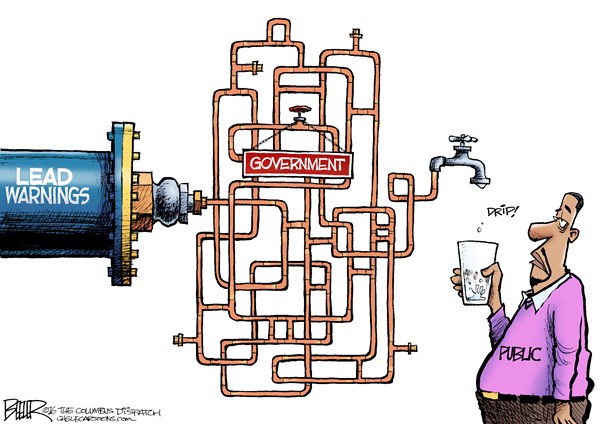 The drinking water crisis in Flint, Michigan tells us that whatever the American right may think, the state has social responsibilities and that society improves when this is taken into account. It also tells us that the ideology of austerity is a toxic product, especially when mixed with environmental racism.

In the summer of 1858, there was an episode in the history of London known as The Great Stink. At that time, London smelled absolutely dreadful due to the sewage which flowed into the Thames. For a long time, the government refused to do anything about it for financial reasons, until in the summer of 1858, the stink became so unbearable that members of Parliament were unable to sit in the House of Commons. A public health revolution was launched and a network of sewers was constructed on a grand scale.

When we read Patrick Süskind’s novel “Perfume,” we can begin to imagine the kind of smell that Paris, on the other side of the English Channel, was emitting at about the same period.

New York Times columnist Paul Krugman recently cited the London episode when expressing outrage that 150 years later the authorities in Michigan, led by Republican Gov. Rick Snyder, kept quiet for at least a year while thousands of African-American residents in Flint drank tap water contaminated with lead, a highly toxic metal. And this despite full knowledge of the problem. Other American commentators have quite rightly pointed out that if a similar public health crisis had struck a wealthy white community, such as Grosse Pointe near Detroit, the government would have acted at lightning speed.

For a scandal of this type to happen in the largest economy in the world is truly distressing. There is the same indifference in the Indian city of Bhopal, but there it has lasted for more than 30 years. Since an escape of toxic gas killed 20,000 people in 1984, there has continued to be a flexible approach to concern for the common good affected by caste and religion. Thirty years have passed since the disaster, yet the inhabitants of poor areas – where the wells have been permanently contaminated by toxic waste produced by the old Union Carbide factory leaching into the soil – are only just now beginning to have access to water which does not poison them. The nicer neighborhoods of Bhopal, perched high above the town, have never suffered.

The town of Flint is not the rule, but neither is it the exception. In Sebring, Ohio, tests last August showed that there were excessive levels of lead in the drinking water, but the authorities waited five months before telling the population. For the past 15 years or so there have been many cases of dangerous levels of lead in water supplies, including in Washington, Jackson and Greenville. On each occasion the authorities have delayed informing the population.

Obsessed by controlling public expenditure, the United States has failed to invest sufficiently in the modernization of infrastructure, notably by failing to replace old lead water pipes. According to the Environmental Protection Agency, governments would need to invest nearly $400 billion by 2030 in order to guarantee the American people clean water.

It is not that America lacks the money to remedy this investment deficit. What is lacking is a social conscience.

Alongside this irresponsibility, which suits the bottled water companies just fine, is another which is even more crass. Worldwide, there are more than 140,000 chemical products on the market (and this number is rising) but only an infinitesimally small fraction of them are subject to testing. In the United States, the EPA has practically no power to test chemical products for toxicity. This means that lakes, rivers and water tables are increasingly – not decreasingly – at risk of becoming contaminated almost before we know it.

In the Global Chemicals Outlook report of 2012, the United Nations Environment Programme launched an urgent appeal to governments and industry to take responsibility for testing. The appeal was barely heard, either in developing countries where the chemical industry is growing very fast, or in the United States, where the Republicans have colluded with the chemical industry lobby to fight tooth and nail against drafting legislation which would eventually give powers to the federal authorities and the EPA. In the meantime, there will be other Flints.