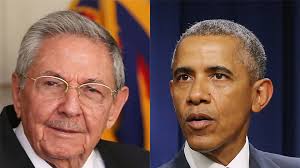 Obama will go to Havana in March. The visit is part of his political shift in relation to the island. He hopes, as John Paul II hoped, that "Cuba will open to the world and the world will open up to Cuba."

This opening up includes, as suggested by The New Herald, admission of independent correspondents to Cuba who are not intimidated by the political police. What will Obama bring among their requests?

Hours before the news, the U.S. State Department announced that it will resume commercial airline flights, up to 100 a day, and authorized the instillation of a tractor assembly plant in Cuba. The White House wants to block any complication from measures that might be taken, if after the November elections, a candidate wins who is against good trade relations with the Cuban regime.

It is very important that the U.S. government spokesman stated that Obama is not planning to visit Fidel Castro. It is a gesture that seeks to underscore what little ideological connection Obama has with the dictatorship. After all, he was born after the Bay of Pigs and was educated during the fall of the Berlin Wall. He is really the first post-Soviet Union president.

Aside from the anthropological curiosity that is provoked by visiting the old tyrant who is not a head of state but a man stuffed into a sports jumpsuit saying weird things, the situation of being photographed with Fidel Castro while he speaks endless nonsense (now aggravated by age and disease) is part of a familiar political ritual that subliminally conveys a message of solidarity, or at the very least, an indifference to the second-oldest military dynasty on the planet, with North Korea being the first.

Obama doesn't want to make this mistake. He is going to meet instead with the members of "civil society." That term includes the opposition. Maybe he'll speak with the writer Yoani Sanchez, with the opposition leaders Garcia Perez "Antunez," Cuesta Morua, and Antonio Rodiles, or the brave "Ladies in White" who peacefully march every Sunday while the political police insult and attack them. The position is obvious: give support to the pluralistic democracy.

Raul Castro, meanwhile, feels he is involved in a contradictory and dangerous game. Obama has unilaterally declared the end to the Cold War in the Caribbean, despite the fact that Havana is calling all hands on deck. The activities of the Sao Paulo Forum, the anti-American strategy of the countries that make up socialism in the 21st century and which is led by Cuba, the transfer of arms to North Korea in violation of the agreement by the United Nations, and the unconditional support in the Middle East to terrorist organizations like Hezbollah are some of that old subversive, anti-American mentality, which the Castros have never wanted to renounce.

Gen. James Clapper, U.S. director of national intelligence, officially stated on Feb. 9 before the U.S. Senate Armed Services Committee that from a foreign intelligence standpoint, Cuba is one of four countries that pose the biggest threat to the United States, with the others being Russia, China and Iran. Hours later, the island returned a North American missile carrying secret technology that "by mistake" was sent to Havana from a European airport. During the 18 months that this “mistake” took place, the rocket was in the hands of Cuban intelligence. During this time, experts assume, the government of Raul Castro had time to copy it, sell it, or share it with their anti-American allies.

What is Raul Castro going to do in the face of the olive branch given to him by Obama? Is he going to erase the distinguishing marks of the Cuban revolution and admit he has lived a lie all his life?

I don't think so. For 60 years, from the time he was raised in the Sierra Maestra and kidnapped some American Marines, his leitmotif has been fighting Washington and trying to destroy the unjust system of capitalism, convinced that the evils of Cuba have come from the private sector and the Yankees. Then life proved otherwise — that the evils of Cuba are the consequence of not enough capitalism or Yankees or democracy, all of which are especially and critically scarce when the generous cow of Venezuela is dying, milked endlessly without mercy in the midst of the horrors of socialism and an orgy of corruption in which there are no foreign investors in Cuba.

A notable expert in international development told me anonymously, "If Raul intends to overcome the social and economic crisis that Cuba is suffering, his timid reforms will not serve anyone if he doesn't open up the political game and establish a free system, although that implies the eventual loss of controlling the state."

He later concluded, "As long as one party exists, and as long as the business incentives are in the hands of a bureaucratic faction that makes the decisions, the country will continue sinking."

All of his countrymen know this. That's why they flee.