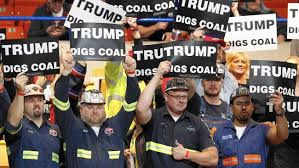 The only hope of the mining sector is to support friends of coal. Donald Trump is such a friend. The enemy is Obama and his policy on energy and climate.

Donald Trump is the last hope. At least for the coal miners in the United States. At least according to Bob Murray, the majority shareholder of Murray Energy, a large American coal mining corporation that primarily operates its mines in the states of West Virginia and Ohio. Recently he held a fundraising event for the presumptive Republican presidential candidate to help the increasingly cash-strapped real estate billionaire with his campaign financing. The only hope for the sector and the miners is to support “friends of coal.” Precisely as Trump is doing.

It is a straw that Murray is clutching at. And it will give him only a little security. The corporation boss who recently announced the termination of up to 80 percent of the 5,400 miners employed by him fosters a clear image of the enemy as “the ongoing deliberate destruction of the United States coal industry by Barack Obama and his supporters.”* Yet the decline of the U.S. coal sector is only in small part due to the Obama administration’s policy on the environment and climate and the actions of anti-coal activists, against whom Murray so vehemently rails. The main cause, according to experts, is primarily competition from the generation of electricity through the cheap natural gas obtained by fracking. It has led to more than a third of all U.S. coal-fired power stations being taken offline or deactivated since 2010.

In his speech on energy and (anti)-climate policy at the end of May, Trump boasted, “We’re going to bring back the coal industry, save the coal industry.” He wants to bring closed mines into operation again and create new jobs. So far, so pithy. Because almost all large U.S. coal conveyors have filed for insolvency or bankruptcy protection. Yet Trump did not say how he would influence the electricity market, especially as he wants to promote the coal-killing fracking industry more strongly. Everything is not so neatly accomplished. But that doesn’t bother Murray. The coal boss is putting pressure on Washington. His might roll out his announced wave of terminations in September just a few weeks before the presidential election so that ex-miners will then also know how to vote.

That will hardly make the election even if Ohio is a swing state, the kind that sometimes votes Republican and sometimes Democratic. Obama and Clinton’s Democrats have a difficult position when it comes to coal miners. But the Murray story shows what chaos would threaten the U.S. with Trump regarding energy policy, too. Not the last hope, but instead, last rites.

*Editor’s note: I could only partially source this quote.