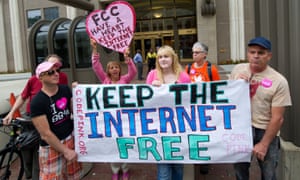 The Federal Communications Commission, the agency responsible for telecommunications in the U.S., is getting rid of net neutrality and with it, the dream of an egalitarian internet. The consequences are foreseeable.

Net neutrality. A concept that at the same time appears to be so complicated and yet so boring that it provides an immediate cure for chronic insomniacs. God, yes. Anything else? It is somehow about this internet, it’s about the stream of data, it’s about the always blundering President Donald Trump and his henchmen. However, cross my heart, our electrical current still comes out of the outlets.

For all who connect to the internet with a phone or computer, it is easy to remember that net neutrality is an old world achievement when you just had to sign up with an internet service provider, and then – as Boris Becker once said cleverly and absolutely correctly – one was “already in.” As a surfer among fellow surfers who saw the same things on the internet, he heard and perceived just like everyone else because the information was equally available to everyone. That is over and done with. Yes, it is time to whip out the tissues.

Trump’s digital hatchet man, Ajit Varadaraj Pai, has long worked to put an end to this data equality that he considers a disincentive, first as a lawyer for Verizon, one of the (few and far between) ISPs in the U.S., and now as one of five FCC commissioners, Pai is a Republican. On Jan. 23, 2017, three days after Trump’s inauguration, he was named chairman of the FCC. The FCC will have done away with net neutrality on Dec. 14, because Pai will have let the FCC decide that the regulations regarding the equal treatment of all data in the internet in effect up to now are unnecessary. This is near and dear to the hearts of American ISPs.

One needs to imagine this as the difference between telephone companies and television networks. The telephone people simply make communication possible; they lay the cables so that people can use them. The television people, however, themselves communicate; they are media who fill their own channels with content. What does this reclassification mean for the internet? A glaring catastrophe.

In Europe, an Agency Protects Equality in the Internet

Anyway, with this tactical chess move, the FCC is circumventing all the painstakingly won regulations under the Barack Obama administration to require the ISPs to act neutrally with regard to content on the internet and allow access to it. They were permitted (until now) neither to throttle content nor prioritize it; neither curb access, nor demand fees for an accelerated delivery of data. As stated, the FCC will not only modify these regulations, but instead completely cut them. Trump declared that the net neutrality implemented by Obama in 2015 “will target conservative media,” which is the exact opposite of enforced net neutrality. This president, who presumably understands absolutely nothing about this, will nonetheless cheer this change simply because another regulation of the previous administration has been eliminated.

Who benefits? As with Trump’s tax reform, the top percent of society, because the ISPs (with a virtual monopoly in some regions of the U.S.) can now decide which content on the internet (for a fee) they will give priority to on its way to consumers. And, because bandwidth on the internet will not be larger and some providers will need wider, faster lanes, it also means that some content will be slower or not conveyed at all any longer. Like with television, whoever pays, fits with or belongs to the network; the politically correct and “hot” content will be broadcast, the others will trickle behind or completely disappear.

This “pay to play” internet (roughly translated as pay if you want to be seen) means that financially weak providers of smaller websites and unknown developers of new apps must wait in line or find an ISP that will let them appear again under affordable conditions. Cat videos could soon become expensive.

However, even the large providers of content must now brace themselves for competition. Thus, search engines like Microsoft Bing could be downloaded and retrieved unimpeded and more quickly compared to Google if Windows pays for it. Or, Google could use its money to push smaller competitors out of the market or prevent them from coming up.

Consequently, the sharpest critics of the FCC like the Electronic Frontier Foundation speak of “cherry picking” content; that is, selection according to taste. They consider these “attacks on net neutrality” to be an “attack on free speech.” They are right, because why should those laying the wires be permitted to decide what flows through the wires? This is quite aside from the fact that consumers can’t even legally negotiate about not having all content equally available on the bandwidth for which they are paying. Similarly, one can’t imagine a situation where some telephone calls succeed, while others do not get a ring tone, according to how much was paid by the party being called.

In Europe, the Body of European Regulators for Electronic Communications, the responsible agency within the European governmental authorities, ensures that net neutrality is maintained. That is because on our continent, too, European ISPs are chomping at the bit to enter the money-driven competition for content. In these parts, for example, Telecom and Vodafone already tried to prioritize certain internet services for their customers. That is still forbidden according to European law. But for how long, when net neutrality in the U.S. will soon be “trumpled” into the ground?*

*Translator’s note: The author is using a play on words replacing the “a” in trampled with a “u.”