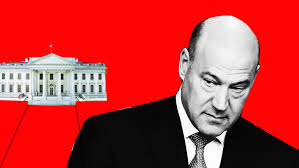 Gary Cohn took his leave from the Trump adventure in the nick of time. The EU doesn’t have this option. It must confront the president and not just with words.

For Gary Cohn it was high time. Donald Trump’s economic adviser lost the power struggle in the White House over free trade and tariffs, and drew from it the only possible consequence: resignation. Cohn, who can look back on a respectable Wall Street career, thus succeeds in taking his leave from the Trump adventure in the nick of time without greater damage to his reputation. No one would have understood if the professional Cohn had agreed to the misguided tariffs on steel and aluminum.

For the rest of the world, especially for America’s closest allies, Cohn’s resignation is a catastrophe. One of the last adults is leaving the White House. Trade policy is now being determined by pop economist Peter Navarro and entrepreneur and free trade opponent Wilbur Ross as secretary of commerce. United States Trade Representative Robert E. Lighthizer opposes the new tariffs according to reports in the American media, but he is not prepared to fight for his convictions. No one else is contradicting Trump’s grotesque Twitter wisdom, according to which trade wars are “good, and easy to win.”

Nothing remains for the partners of the U.S., the Canadians, Mexicans and Europeans, other than to resign themselves to the fact that the once leading Western power has taken leave of the liberal world economy, hopefully only for the time being. What “America First” means is now becoming crystal clear. It is the return of uncompromising protectionism, which one thought had long since been relegated to the trash heap of history.

The EU Must Confront Trump’s Folly

The EU and especially Germany must also respond to this development whether they want to or not. The German federal government and many managers from the German economy want to avoid a trade war by answering Trump’s tariffs not with retaliation, but with talks. That could prove to be a pipe dream.

With Cohn’s departure, the Europeans have run out of discussion partners. If the administration in Washington no longer has any interest in the liberal trade order, then it no longer makes sense to put up with Trump’s loutishness just to avert his being loutish in the future. He leaves no doubt about his intention to do this as his threat of punitive tariffs on cars proves. Certainly, the EU should not escalate the dispute itself. But it must confront Trump’s folly and do so not just with words.