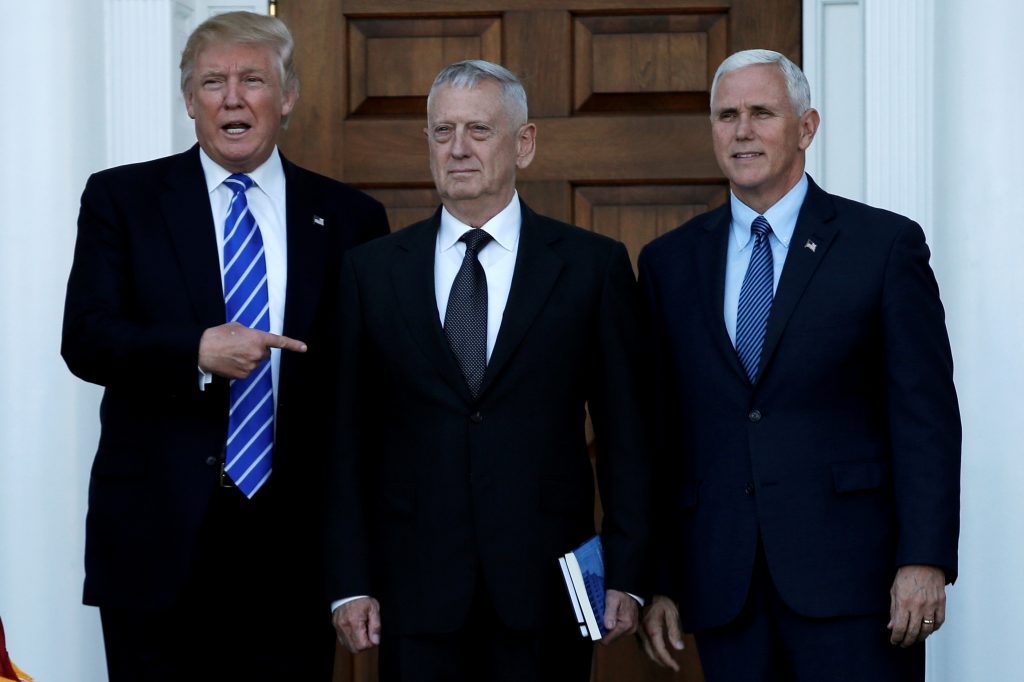 The Pentagon chief is one of the most important “adults” in the American administration, who looks after Donald Trump to keep him from making decisions like a little child.

Who will represent the United States, which played a key role in the birth of the Czech Republic, and come to Prague to celebrate its hundredth anniversary? Who would that be? It was assumed that the representation from Washington would correspond to the significance of the occasion, and it was long rumored in Prague diplomatic circles that Vice President Mike Pence would come.

But as the magazine Respekt reported on Thursday, it turns out to be American Secretary of Defense James Mattis. The Czech Republic might feel disappointment that on Oct. 28, the hundredth anniversary of the day that symbolizes the Czech-American political alliance, shared interests and values, only the Pentagon chief will be coming, and one nicknamed “Mad Dog” among American Marines at that.

Quite the contrary, the four-star Marine general is, of all Trump’s men and women, the best person who could come. One practically wants to cry out: If not Mattis, who; if not now, when?

Vice President Pence is a higher political figure, true, but therein lies the very problem. He’s the one who has Trump’s back – with unconditional loyalty bordering on loss of face. The deeply faithful evangelical would not, as he publicly declares, even go to a restaurant with a strange woman (that is, other than his wife). How far Trump went in his extramarital dalliances is his business. But what about Pence? Doesn’t it bother him to serve a boss who, through his lawyers, pays hundreds of thousands of dollars in hush money to his casual lovers?

Unlike Trump, Pence likely won’t be a political businessman for whom everything, including relations with allies, is up for sale. But the quiet, tepid gaze − with which he always looks up to Trump on camera, no matter what he says, no matter what happens − looks devoted to the point of incomprehensibility. In short, if Pence came to Prague, he would be a rather shriveled, lousy copy of the original.

In Mattis’ case, however, one of the most important “adults” from Trump’s highest entourage is coming to Prague. As journalist Bob Woodward aptly portrayed in his latest book “Fear,” which describes conditions in Trump’s White House, Mattis is the key man able to tame and effectively channel Trump’s accounting-style, debit-credit perception of the surrounding world.

It’s not so much our concern what Trump pursues in domestic American politics. Americans can calculate that in the next elections. But Europe and the Czech Republic have a considerable stake in U.S. foreign policy, and various things − often very strange things − are running around in Trump’s mind.

He has a weakness for Vladimir Putin. A strong leader, so they say, with a sense of order, who knows how to get what he wants. For some reason this awes Trump, and to make matters even more serious, the traditional trans-Atlantic, U.S.-European alliance is for Trump basically nothing more than a business transaction. Pay your share, or the whole deal falls apart. Stop shipping Mercedes to the U.S. and spend at least 2 − or better yet 4 − percent of GDP on defense. Or else? The EU is dead, NATO is bad!

But in the end, Trump’s Barnum and Bailey show, in which he threatens the alliance with an American exit at a Brussels summit, and at home in the U.S. boasts of putting NATO in its place, is counterproductive. German politicians must now come up with other reasons to spend more on defense. Justifying it by the American president’s wishes would be the road to Trump’s hell.

Gen. Mattis, Supreme Allied Commander of NATO forces from 2007 to 2009, has seen firsthand that many European allies have indeed been free-riding. They derive much more from collective security, cheaply, than they contribute to it themselves.

“No longer can the American taxpayer carry a disproportionate share of the defense of Western values. Americans cannot care more for your children’s future security than you do,” declared Mattis when he introduced himself as the new defense secretary to Europeans in Brussels last February. But not even for a moment was that, nor is it, a reason for him to question NATO as such, or to speak of it as an “obsolete” organization totally superfluous for the U.S.

In sharp contrast to Trump, Mattis well knows with whom he has the honor to deal when it comes to Putin. “Putin seeks to shatter NATO. He aims to diminish the appeal of the Western democratic model and attempts to undermine America's moral authority. His actions are designed not to challenge our arms, at this point, but to undercut and compromise our belief in our ideals,” he recently said in the American Senate.*

Trump will try to create the impression that he’s strengthening NATO. Meanwhile Mattis really does it. It was under his initiative and pressure that allies committed to having new units in a state of readiness, capable of reacting quickly to threats on NATO territory or in its immediate vicinity by 2020—the 4 x 30 Initiative.

At the same time, Mattis deserves the basic credit for getting Americans to substantially increase their budget for their military presence on the eastern wing of the alliance. And it was Gen. Mattis who, in the face of Trump’s vigorous and longstanding reluctance, successfully pushed for the delivery of arms to the Ukrainian army.

From the Czech Republic to Trans-Atlanticism

Vice President Pence would have a lofty speech full of grand historical architecture written for his Prague visit. It would make for good listening, but one could believe it only tentatively. The words of politicians in Trump’s White House generally don’t carry much weight, with one exception − Gen. Mattis.

In the current administration he’s the most effective “quiet strength” that corrects and attenuates the instincts of Trump, a man from the world of political show business, where form is more important than content. Mattis is one of the “adults” in the White House who prevents Trump from making decisions like a small child every so often.

Pence would leave behind a greater, more representative impression in Prague. But with Mattis substance will matter. A grand political interest united us a hundred years ago. The “Mad Dog” is one of those who are convinced that its legacy and logical continuation must always be a strong trans-Atlantic commitment, vitally important for both sides, that is not just a commercial relationship. That can be a positive, useful and dignified visit.

*Translator’s note: According to media sources, Mattis actually made these comments during a commencement address at the Naval War College in Newport, Rhode Island.