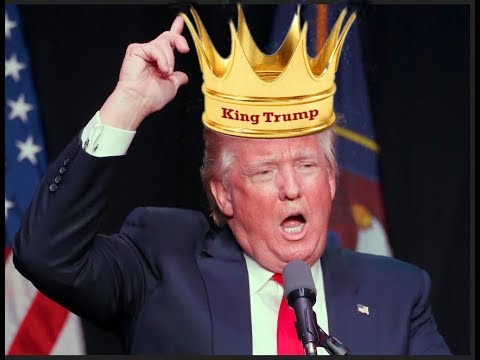 On July 23, 2019, the eve of former Special Counsel Robert Mueller’s hearing before Congress, Donald Trump offered a lesson in constitutional law to a group of young conservatives.

After denouncing the length and the cost of the Russian investigation, the president declared that Article II of the Constitution gave him “the right to do whatever [I] want as president.”

“But I don’t even talk about that,” he added, pointing out that Mueller’s report had cleared him of accusations of collusion.

In fact, he was talking about “that” for the umpteenth time since the spring.

“Article II allows me to do whatever I want,” he told ABC journalist George Stephanopoulos on June 16. “Article II would have allowed me to fire him."

“Also, take a look at one other thing. It’s a thing called Article II,” he told a group of journalists on July 12. “It gives me all of these rights at a level that nobody has ever seen before.”

During the same period, he also raised the subject in interviews with Time magazine and with his good friend from Fox News, Sean Hannity, among others.

And perhaps it was with Article II of the Constitution in mind that Donald Trump believed he was authorized to seek interference from a foreign country, namely Ukraine, in the 2020 presidential election, in a phone call made the day after Mueller’s hearing in Congress.

Perhaps it is also on the basis of his interpretation of the same article that he unilaterally blocked $391 million in aid granted by Congress to Ukraine.

Against All Monarchical Hopes

But what is in Article II that gives the president the right to do what he wants? In short, this article, as interpreted by Trump, does not exist.

As all American schoolchildren learn, America's Founding Fathers relied on the concept of separation of powers and the system of checks and balances to prevent any hope of monarchy by the leaders of their young republic.

Article II of the Constitution grants the president “the executive power,” while providing for his removal from office "on Impeachment for, and Conviction of, Treason, Bribery, or other high Crimes and Misdemeanors."

Did this part of Article II escape Trump?

What is certain is that the Founding Fathers believed it was important to add it to the Constitution, to allow Congress to remove from power a president who commits one or more offenses “with sinister intent to harm the republic for personal gain,” writes historian Jeffrey Engel in the introduction to his book published in 2018, entitled “Impeachment: An American History.”

In the minds of the Founding Fathers, the offense could be political, and not criminal in nature. In fact, to use the words of future President Gerald Ford in 1970, well before the Watergate affair, “An impeachable offense is whatever a majority of the House of Representatives considers it to be at a given moment in history.”

Four years later, the same Ford succeeded Richard Nixon, who chose to resign rather than face impeachment proceedings. A few days earlier, the publication of White House recordings proved that Nixon had called the FBI and the CIA to hide the links between his reelection committee and the burglars who broke into Watergate, where the Democratic Party headquarters were located.

To Hell with the Consequences

Many Democratic representatives believe that Mueller should have convinced House Speaker Nancy Pelosi to give the green light to an impeachment procedure against Trump. According to them, the Mueller report proved the president was guilty of obstructing justice.

But the California congresswoman long resisted calls for removing the president. She reiterated that such a procedure would be likely to tear the country apart and contribute to Trump’s reelection.

Today, she says that the president has left her no choice. And she claims not to be concerned by the political consequences of a possible impeachment procedure.

“No one is above the law,'' she said last Tuesday. The House speaker made this statement the night before a transcript of the telephone conversation of July 25 between Trump and Volodymyr Zelensky was released.

“There’s a lot of talk about Biden’s son, that Biden stopped the prosecution and a lot of people want to find out about that, so whatever you can do with the attorney general would be great,” the American president told his Ukrainian counterpart, and then asked him to work with his personal lawyer, Rudy Giuliani, and Attorney General William Barr.

No one mentioned that this same Barr is at the root of Trump’s confusion about Article II of the Constitution. Like some conservatives, among them Dick Cheney, the attorney general is a supporter of the unitary executive theory. In its extreme form, this theory can mean that neither Congress nor the courts can tell the president what to do or how to do it.

One would think that an American president would have to be a little crazy to adhere to such a theory. Or think that he's a king.