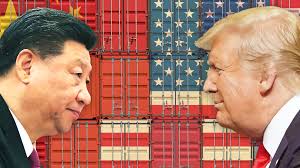 In the context of incomplete power reform, the Chinese leadership chose to make concessions and refrain from a global confrontation with the United States.

The scale of the first phase of the trade deal between the U.S. and China shocked many. According to the agreement, China will purchase an additional $200 billion in American goods and services over the next two years, of which $52.4 billion will be spent on energy and about $32 billion on agricultural products. However, economists are not sure that China will fulfill these obligations. Chinese officials have stressed that they intend to proceed with purchases based on the dynamic of supply and demand. Nevertheless, the first phase of the trade deal, without promising the second phase, gives China only some respite. Beijing expects there won't be any surprises before the U.S. presidential election in November. So why did they make concessions?

Agreement on the first phase means that the "tactical retreat" party won in Beijing. The slogans "withstand, go blow for blow, and wage war to the end," which seemed to dominate for a time, turned out to be unrealistic. In some areas, China's dependency on the United States remains critical, and despite urgent measures, eliminating the technological gap is unrealistic. However, the Chinese government isn't, of course, going to abandon this goal.

Chinese businesses as well as foreign companies that didn't want to become embroiled in the trade war watched as Beijing and Washington exchanged ever more severe blows. The volatility of the Chinese stock market increased, and investors had to be reassured. They needed a demonstration of China's ability to find compromises, even with such a difficult partner as Donald Trump. This deal refutes the widespread, uncomfortable opinion that all the troubles of the world economy are caused by the inability of the People's Republic of China and the U.S. to somehow agree.

That's why Chinese negotiators abandoned the principle of a balance of interests and didn't insist on a return to the pre-trade war situation. In the spring and summer of 2019, Beijing offered three conditions under which it was prepared to sign an agreement: lifting of all tariffs that were imposed, practical volumes of purchased American goods and a balanced text in the agreement. They made concessions on all three. The last condition is solely political. China, as a power equal to the U.S., cannot afford to lose face, which means there cannot be any hint of an unequal agreement. Chinese bloggers now complain that in the agreement, the phrase, "China is obliged" is repeated more than 100 times and the phrase, "the U.S. is obliged" is found only five times. Perhaps that is why Xi did not sign the document.

Nevertheless, without the approval of the head of the PRC, the document would not have been signed. The top leadership of the PRC not only made economic concessions, but political compromises to reach a deal. It came to be understood that the mobilization scenario of turning China into a besieged fortress and escalating tensions with the U.S. to the levels of the 20th century's Cold War threatened not only economic growth, but political stability in the country. A complete economic and strategic break with the most powerful country in the world — known by the fashionable term, "decoupling,” in political science literature — fits well with the ideology of the revival of the Chinese nation, but is dangerous from the point of view of practical politics.

The Republicans and Democrats' unexpected consensus on Beijing made people wonder how united the Chinese elite is within the framework of their one-party system, and how much the Chinese bureaucratic machine is willing to work smoothly in near conflict conditions. Against the backdrop of reforms by Xi to strengthen power vertically, increased external pressure was clearly inconvenient. The outbreak of coronavirus in Wuhan clearly showed the country's managerial problems. Even with a powerful epidemic response system, China's actions were delayed. It took personal instruction from the PRC president to push local authorities toward more decisive action.

A reasonable solution to this situation would be to postpone the risky Chinese-American decoupling, if possible, in order to focus not only on the development of an innovative economy, but also on changes in domestic policy. To do this, it was necessary to eliminate the contradictions inherent in the United States' plans to resolve specific issues including procurement volumes, intellectual property protection and the refusal of mandatory technology transfer for American companies operating in China. In general, it would be ideal to ease the sense of a global battle, the prospect of which has cast doubt on plans made by the Chinese leadership. It was here that Beijing was able to outplay Trump, whose intentions were initially much more serious.

Chinese social networks compare Vice Premier of the State Council of the People's Republic of China Liu He, who signed the trade deal, to Li Hongzhong, a high-ranking official of the Qing dynasty, whose name has become synonymous with humiliation in the era of unequal treaties. The analogy is certainly unfair and suggests that public expectations, fueled by the official theme of national revival, are still far ahead of actual possibilities. The discussion about how China should respond to growing external and internal challenges is not over at the political level or in Chinese society as a whole.