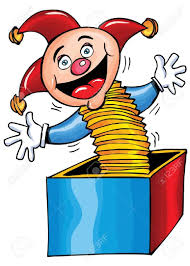 Young nation seeking 70-something-year-old, nearing 80, for the White House, to replace a white 73-year-old man, pathological liar, envious of autocrats, who has turned the liberal world order upside down. Women need not inquire. Yes, it is a nation for old men, but not yet for women; yes, it was a nation ready for a black man to be president. A nation seeking a gentle change, not a revolution; needing a diverse coalition to stitch the United States back up.

Everything is possible in America, as it was in 2016 with the unexpected victory of a political “outsider” who governs by posting outrageous and dimwitted tweets. I remember some jack-in-the-box contraptions from my childhood. The U.S. is now a box of surprises containing some of everything. Everything is possible in America, as Rita Moreno sang in “West Side Story.”

The box of surprises also contains a significant fact. For the first time, socialism is no longer triggering the reaction that it used to, and a recent Gallup poll highlights the fact that young people have a favorable opinion of the ideology which was considered obscene until recently. The idea is beginning to take hold that a superpower cannot continue to be afflicted by the fact that the gap between the 1% and the 99% is greater than ever. But, Michael Bloomberg, it is not possible to buy the presidency by investing half a billion dollars in a carpet bomb of television advertisements.

In only a few days, the Democratic primaries have purged the presidential election race of candidates. Of Agatha Christie’s “10 Little Indians,” only two remain. Bernie Sanders, 78 years old with two heart stents, a self-proclaimed democratic socialist, a populist like Donald Trump, a senator with no legislative footprint, a grumpy conqueror of the political and financial establishment. Sanders is an impracticable Democrat who would probably give a second term away to Trump. The president would be delighted to face Sanders -- whom Trump in his petty way called “crazy,” -- and not Joe Biden. Sanders brings another surprise to the table: Younger voters are his main base of supporters, as well as Latinos, who buy into his passion for attacking the system. The very consituents who vote the least. The Democratic option is now solely binary. Sanders or Biden. The latter, also a senator for 36 years, epitome of the political class, 77 years old, Barack Obama’s vice president for eight years and a moderate, is a force of calm, a risk-free replacement for Trump. He has been battling a stutter since childhood. He fumbles in the debates, but he endears himself with his normalcy and decency. And, above all, he is electable.

The new coronavirus has infected the world economy. Trump’s main bargaining chip in seeking reelection on Nov. 3 is a U.S. economy that is running smoothly. One cannot rule out that the epidemic could end up being the black swan – the unthinkable and uncontrollable occurrence – that overthrows Trump, at the risk of a recession. The last surprise in the box. It is still anyone’s game.