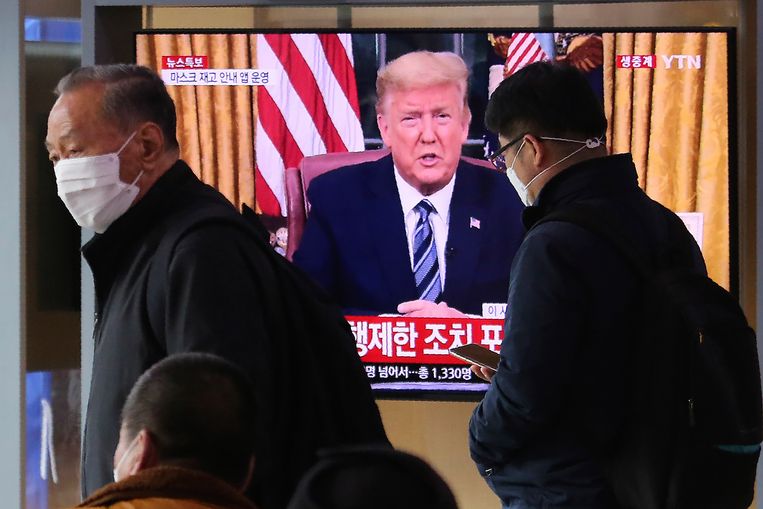 Donald Trump is more a puppet of events than the reliable pilot through choppy waters that a president must be.

Donald Trump’s Wednesday night announcement about a travel ban involving the Schengen Area had stiff competition from national coronavirus news: the National Basketball Association announced that it was suspending the playoffs. And there was entertainment news: Tom Hanks and his wife were infected and had gone into quarantine in Australia.

All that made it an important day for the new coronavirus in the United States. Maybe even the day that the entire country became convinced about how serious the situation is, maybe even Trump supporters. According to a recent poll, 68% of Democratic voters worried a week ago about getting infected. Only 34% of Republicans said they were frightened.

This was related to the president’s remarks and tweets. While China took draconian measures to stop the epidemic and the situation got out of hand in Italy, for weeks Trump suggested that the U.S. was getting away scot-free thanks to vigorous restriction of air traffic from China, and later from Korea and Iran.

Contrary to what doctors, hospitals and virologists were saying, Trump claimed that everyone who wanted to be tested could be tested; that a vaccine for the disease would take a matter of months; that it all was no worse than the flu, and that the virus, like so many other pathogens, would disappear on its own by the spring. According to Trump, the fake media, which favored the Democratic Party, were making it worse than it was. He called the complaining governor of Washington, one of the states affected the worst, a “snake.”

To the relief of many experts and politicians, the president adopted a very different tone when he spoke Wednesday night. He addressed the nation sternly, announced concrete, far-reaching action with the travel ban, and promised measures to support a badly affected economy. As one might expect from a president, he reassured the public. “We have the best economy, the most advanced health care, and the most talented doctors, scientists and researchers anywhere in the world. … the virus will not have a chance against us.”

Immediately after Trump spoke, having pronounced the traditional “God bless America,” there appeared to be problems with what he said. No, not all people and goods from across Europe were banned; only people from the Schengen Area, and American passport holders and permanent residents and their family were exempt. No, not all medical costs would be reimbursed if someone was infected, only the cost of the tests. No, those tests were still not widely available.

Trump Is More of a Puppet

If you search for those in the United States who are leading the fight against the coronavirus, you will find those at the top level of federal medical institutions who are openly challenging the president more often when he is wrong. You will also find the governors of all 50 states and mayors of large cities leading the fight and planning their own courses of action. In New Jersey and Connecticut, meetings of more than 250 people are forbidden. New York, with all its theaters, is keeping the number at 500. Los Angeles is discouraging gatherings of more than 50 people.

Given the federal structure of the U.S., it is not unreasonable to see such decisions being taken at the local level. The president can contribute concrete measures that help these local governments and that support citizens and businesses that are directly affected. Trump promised that support, but he depends on the House for that money, and thus on the Democrats.

Shortly after Trump’s speech, the Democrats put their own wish list on the table. In that respect as well Trump is more of a puppet with regard to current events than the reliable pilot through choppy waters that a president should be. The coronavirus could not have come at a worse time for the president’s reelection prospects in November.