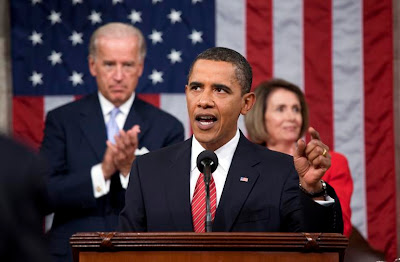 In his State of the Union Address, Obama set about re-launching his perceptions: America needs tangible policies, not visions.

Obama’s State of the Union Address could just as well have been subtitled “Welcome to the Real World!” The most surprising aspect of his offensive was the public display of pragmatism. Obama seemed to be saying that the American people wanted tangible political results and not just visions. In that, America’s first black president reinvented himself last night. It was a new start that was absolutely essential.

Hope, change, and all the other magic words that carried him to the White House a year ago don’t count for much anymore in a Washington political establishment more divided now than ever before. The Democrats, as Obama said, still have a clear majority in both houses of Congress, even after their defeat in Massachusetts.

But after one year, euphoria has been replaced in large measure by frustration. Obama’s greatest failure, among several exaggerated expectations thus far, lies in his not achieving bipartisanship. But Obama is probably least to blame for that failure. The Republicans oppose everything he proposes, and whenever they fail to do so, Democratic dissidents throw up roadblocks to his initiatives.

“I thought I’d get applause on that,” Obama said, glancing to his left where the Republican faction was seated. He was speaking directly to them when he said, “We lowered taxes for 95 percent of working Americans,” and their response was little more than an icy silence.

Naturally, he was being ironic. Obama knows better than to expect Republican applause for anything he does. He won’t garner any bouquets with health care reform, and the same holds true for the war in Afghanistan. He mentioned military operations in the Hindu Kush a total of only three times.

Obama’s main focus now may be found in doing a word search on the text of his speech. “Jobs” was said a total of 23 times in one hour; every three minutes, that magic word was repeated. It’s the word Obama now employs in the hope of regaining approval.

He knows his enormous accomplishment of preventing America’s plunge into another economic depression won’t save him. He knows Americans aren’t interested in hearing about “vision” at the moment. The bottom line is that people have to be able to pay for the cure their doctor has prescribed for them.