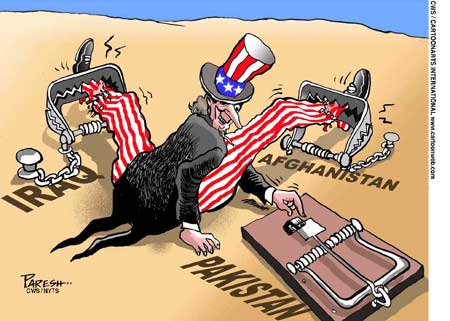 While officially announcing the United States’ phased withdrawal from Afghanistan, American president Barack Obama said that cooperation between the U.S. and Pakistan against terrorists should continue, and Pakistan will have to keep its promise of cooperation. He also said that as long as he is president, the U.S. will not tolerate any terrorist hideouts in Pakistan. The U.S. Secretary of State has said that military aid to Pakistan is conditional and will not be provided until Pakistan takes concrete steps against terrorism. In the official announcement, Barack Obama said that during the current year, around 10,000 soldiers will leave Afghanistan, and by 2014, the exit will be complete.

President Obama said that he will not allow the terrorists to attack the U.S. or its allies and that the U.S. has gotten so much intelligence from the Abbottabad compound that now al-Qaida is under pressure. He hoped that there would be progress in talks with the Taliban. While giving an interview to VOA, he said that the presence of terrorists between the borders of Afghanistan and Pakistan is precarious for the whole region. Even though President Obama has announced that the U.S. will pull out all its troops from Afghanistan by 2014, it is alarming that he has hinted at hostility towards Pakistan. He said that the U.S. will not continue to provide military assistance until Pakistan takes solid steps against terrorism.

Pakistan has sacrificed 40,000 lives and $80 billion. Every peaceful Pakistani city has been turned into a battleground. Pakistan has to face damage to areas all the way from social values to the economy; in spite of all this, the United States is not only unwilling to acknowledge our sacrifices but is also unwilling to trust us. The results of going to war under false pretenses are always so negative. America started the Iraq war under false pretenses and the resulting destruction is in front of the world. After this, the U.S. took control of Afghanistan by using 9/11 as an excuse. The United States lies about the reason for the War on Terror. Before America came into this region, terrorism did not exist here. Our borders were secure, there was peace in our country and our economy was making good progress. However, the dictator Pervez Musharraf, just for his own self-preservation, made Pakistan a part of the American war based on lies, which has led to the Pakistani future being dark. This is the main reason why, even after great sacrifices and losses by Pakistan, not only does the United States not trust Pakistan, it is also not prepared to leave Pakistan alone. The U.S. has only one demand: It does not matter how much damage Pakistan suffers, but it should keep on fighting for American interests, spending all its resources to wage war against its own people.

Why does the world not ask America: If the people it calls terrorists now were once the apple of its eyes, how did they become terrorists? The horrible fact is that even if America says it is daytime when it’s nighttime and vice versa, the world will agree with it, even when it knows better. Because of America, the world is being consumed by the flames of war and terrorism. America is telling the world that it is at war against terrorism. However, it is actually waging a war against Islam, and its real partners are Jews and Hindus, who have set America on this course. If America was fighting against terrorism instead of Islam, then why is it supporting terrorism perpetrated by Israel against Palestinians and terrorism inflicted by Indians against Kashmiris instead of opposing it? And why is it hostile towards only Muslim countries like Iraq, Afghanistan, Libya, Sudan, Yemen and Pakistan?

If the countries in the Muslim world had seen the true face of America and raised a united voice against the United States, then today, the world would not be going on a path to destruction. However, the Muslim world’s illicit silence means that Muslim countries are slowly being targeted one by one by America, its allies and the hidden powers behind it on the false pretext of a war against terrorism. At the time America started to enter this region, patriotic Pakistanis were warning us that the main American objective here was not Afghanistan but control over Pakistan’s nuclear assets and creating problems for China. However, leaders and intellectuals who got influenced by American dollars presented America as the savior of the century for all mankind. But now, time has lifted the mask from the savior’s face and the real face has been revealed, and hostility towards Islam and Pakistan is dripping from this face. This hostility is compelling them to increase pressure on Pakistan to conduct operations against terrorists. The question is who created this terrorism? And did Pakistan not sacrifice everything in this War on Terror? What should have happened was that Pakistan should have been compensated for the loss it incurred during the War on Terror. Instead, Pakistan’s options are now being limited, and it is being said that success in Afghanistan can be achieved without Pakistan. If this had been true, then why was Pakistan dragged into this war? The fact is that America and its allies are losing the war based on lies, and their true motives are becoming apparent to the world. America is saying that it can handle the Afghanistan war to apply pressure on Pakistan. In reality, it is the opposite. America cannot win the war in Afghanistan and it cannot exit Afghanistan with its honor intact without Pakistan’s help.

America has shown its true face and stated its real motives, which are against Pakistan. Now, it is up to our leadership and responsible agencies to decide how to secure the country against American terror and make the nation and citizen’s futures secure.