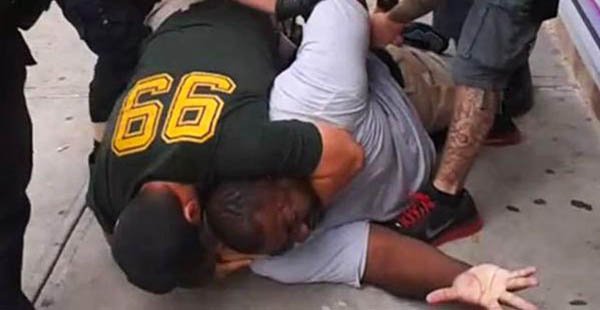 The Washington Post recently reported that, as of May of this year, there have been 385 deaths by police gunfire — an average of more than two people per day shot to death. If this average holds up, nearly 1,000 people will die by a policeman’s bullets this year. This number was reported voluntarily by the police; however, the real number could actually be higher.

According to American law, when a policeman’s own life or the lives of others are threatened, he has the right to use deadly force. However, whether in 1,000 separate incidents American policemen have had no alternative but to pull the trigger in an effort to protect themselves or others from harm is quite suspicious. Recently, the large number of citizen deaths at the hands of the police has stirred up a flurry of nationwide debate over whether the police exercise violent means of law enforcement. People are particularly interested in the issue of deadly force used against minorities.

Statistics show that, of the individuals whose lives have been snuffed out by police fire, one half were white and the other half were minorities. However, of those unarmed who have been shot dead by police, two-thirds were either of African or Hispanic descent, with blacks being three times more likely to be killed by gunfire than other minorities or whites. To say that these shootings were necessary is a matter that demands serious scrutiny. However, policemen are law enforcers, and the American legal system has yet to create regulations that seriously monitor the actual law enforcement procedures used by the police. This makes it is difficult for people to prove the policeman’s law enforcement tactics were excessive or to certify that the policeman’s deadly use of firearms was unwarranted.

In past instances of these types of events, American justices have usually ruled in favor of the police. For example, over the last 10 years, American police have opened fire and killed tens of thousands of suspects, and among them, only 54 cases have resulted in lawsuits, with these suits frequently being left unsettled. Be this historical inertia as it may, there was a major turnaround in a case this April 4. A South Carolina police shooting was caught on tape, thus proving the use of excessive force on the part of the officer: A white officer killed Walter Scott, a black man.

This sequence of events represents just the tip of the iceberg of the illegal police shootings that have taken place in America. The actual situation is much graver. The issue of America’s violent law enforcement and its utter disregard for human life came under special review by the United Nations Human Rights Council in the country review report. It is unfortunate that, in the minds of many an officer, to tote a firearm around in the name of the law is to proclaim himself king of all he surveys, thus putting himself in a position above the average citizens — his countrymen.

It goes without saying that those of African descent become even less of his equal. When some officers are faced with the decision of whether or not to open fire on a suspect, they often just indiscriminately shoot to kill.

As enforcers of the law, American police officers most certainly have the right to keep order and protect themselves. The issue is that this power is clearly being abused. This abuse of power has long been a chronic disorder in American society, thereby giving rise to the cyclical disturbances and riots that take place in the country. This is precisely why the loss of freedoms and rights of today’s American people is a systemic issue, practically untreatable by any means.

America is about to celebrate the 239th anniversary of its independence, yet the high ideals that the founding fathers once held for a nation in which all men are created equal are still a long way from their realization. America has gone from the declaration of its independence to the abolition of slavery, from segregation to equal rights for all — a journey that took nearly two centuries. Today, the question of how to treat the present disorder between America’s races that has led to self-segregation and how to alleviate the inter-racial conflicts brought on by brutal law enforcement is a challenge equally important as those presented on the journey of the past 200 years.

The author is vice president and a professor at the Fudan University of International Studies, Shanghai.