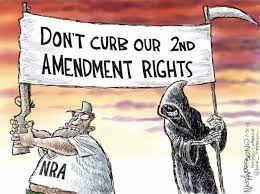 Attacks on African-American citizens in the United States are part of an outdated and dangerous moral system.

Citizens and legal residents of the United States have an estimated 200 million firearms of varying caliber in their possession, and their right to carry them is enshrined in the Second Amendment, whose exact wording reads: “A well-regulated militia, being necessary to the security of a free state, the right of the people to keep and bear arms, shall not be infringed.”

You don’t have to jump through too many hoops to walk away with a 9 mm pistol or a powerful rifle. But according to statements made by the firearms dealer who sold arms and munitions to the young South Korean who went on to commit the Virginia Tech shooting: “This wouldn’t have happened if arms had been allowed on campus.” In other words, this expert’s argument relies on the virtues of a population forearmed with weapons of war, ready to come out shooting in the face of any threat.

The issue is larger than that, however. And though it would be easy to politicize the comment and demonize U.S. culture on the basis of the warmongering raving of its Republican faction, it would not be fair to a significant proportion of the population, whose belief in peace and democracy has prevailed against war in the latest polls.

The phenomenon, whose manifestations have ceased to be isolated cases, can be better understood by taking measure of the impact on new generations of a society based on a hedonistic lifestyle that is geared more toward its consumer necessities and junk entertainment than to prioritizing the cultivation of the mind and the spirit.

Add to that — the ultimate in entrepreneurial freedom! — a total absence of control over the creation, promotion and advertising of movies and video games whose plots revolve around the most sophisticated methods of annihilation of other human beings with all kinds of lethal weapons and are destined to absorb the attention of children and adolescents at a time in their lives when their values are being formed.

The right to possess and carry firearms is defended by members of the influential National Rifle Association, but they are not the only ones. Their position, like the validity of the Second Amendment, is supported by many citizens who inherit this attitude from their forebears that the right to possess and carry arms is one of their inalienable rights, a form of freedom.

Freedom, like democracy, is a relative concept and its meaning is interpreted in many different ways. But as a philosophical concept, it has also been the excuse offered by many leaders to justify their annihilation of other cultures, their appropriation of wealth and territories belonging to others, and the incidental murder of those who get caught in the crossfire.