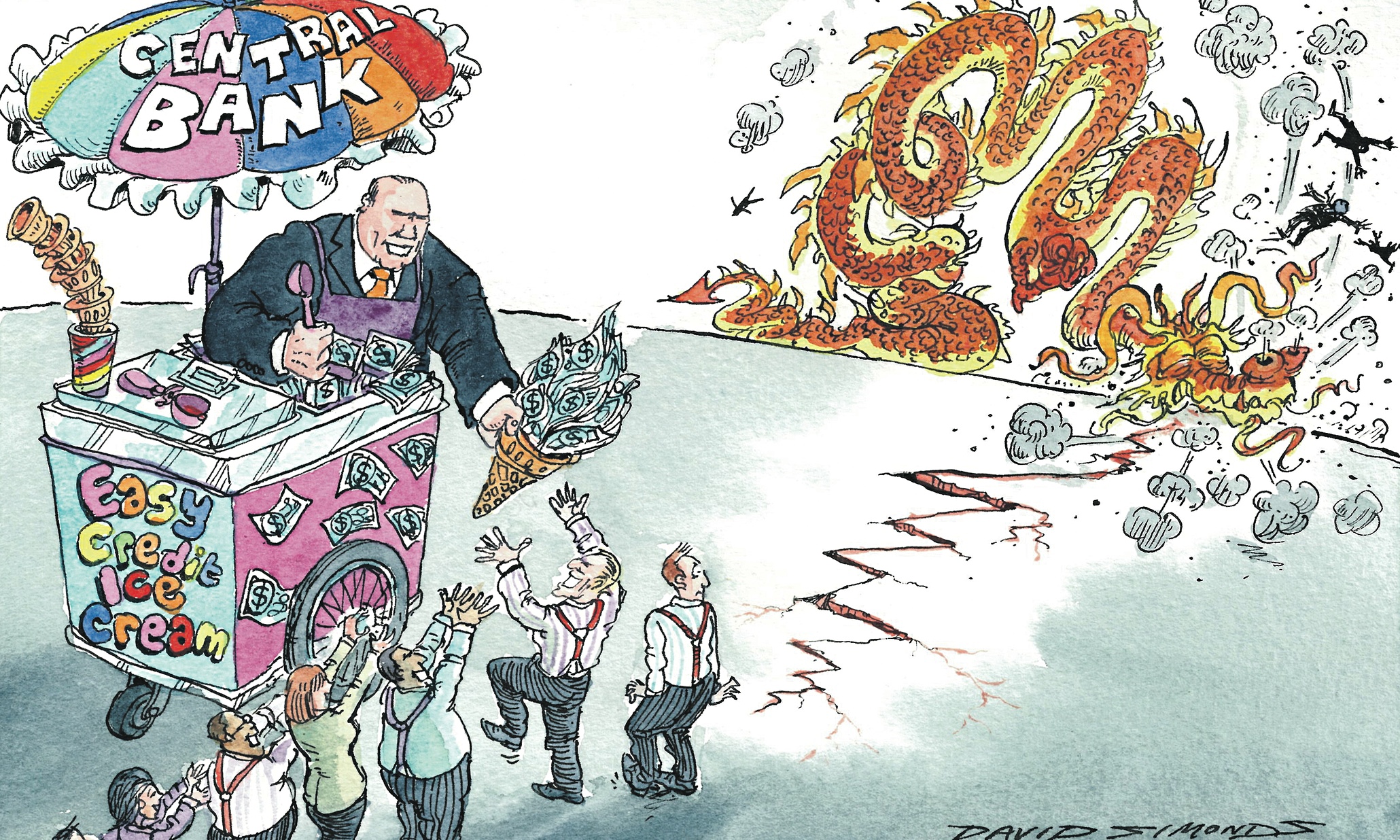 When announcing last Thursday, Sept. 17 [1] that it will not raise interest rates, the Federal Reserve surprised a lot of economic commentators and specialists.

After seven years of a monetary policy made of quantitative easing and zero-bound interest rates, quasi-exclusively benefiting Wall Street, for months the Fed has been preparing financial minds by clearly hinting that it was time for a normalization. Its central bank status credibility, and particularly the value of the dollar in terms of international reserve currency, could not allow laxity any longer. Besides, the statistics of the American economy, mass-broadcast by indulgent media outlets, were supposed to prove that activity was picking up and were thus justifying a tightening of monetary policy.

No, that’s not what happened. The Fed chose to maintain the status quo for the umpteenth time by postponing its decision to raise interest rates. This decision shows how cornered the Fed is today. The American economy, in reality, has never recovered from the 2008 meltdown. The unemployment rate is officially under 6 percent but the working-age population which has been taken out of the job market is reaching 100 million [2]. The poverty rate has never been so high. The Fed’s accommodative monetary policies are nothing but a headlong rush into disaster. In addition, the Chinese economic market is plummeting. As a result, the Chinese authorities have decided to lower their exchange rates to stimulate exports. In Asia, a currency war is raging between net exporting countries, squeezing export values [3].

These two factors result in an explosive deflationary cocktail. A decrease in prices all across the board could appeal to the end consumers that we are — at first glance. The reality of modern banking structures proves us wrong. Deflation generates a pernicious cycle: a fall in prices, wage squeezes and a debt burden then proportionally increased and thus more difficult to pay off. Considering the debt ratio of our economies and the predominant role of the banking system, we understand that deflation has become a menace for all of us [4].

With these issues taken into consideration, the Fed is incapacitated and cannot raise interest rates because it would exacerbate the situation. Trapped by its own self-indulgent policy, it can only lead us to believe that it will tighten its policies at some point in the future. Helpless, communication stunts seems to be its sole means of keeping up appearances — which explains the nuance brought to the fore one week after the Sept. 17 announcement.

What seems to unfold, in reality, is the generalization of negative interest rate policies, as is happening in an increasing number of countries such as Switzerland, Denmark and Sweden. The crucial point to understand is this: The generalized fall in prices that deflation creates is only the consequence of a decrease in available money; that is to say, the monetary mass being the sum of all debts issued by financiers, both individuals and companies. A study run by the Bank of England clearly explained that in today’s monetary system, it is the bank loans that create deposits and not the other way around [5].

Therefore, the Fed must, at any price, push people to go into debt. And what better way to push consumption than by taxing savings and deposits? If tomorrow, the money saved in banks starts to devalue, surely we will be more inclined to spend it quickly? Our dislike for risk is mitigated. There’s no reason not to invest in financial projects or in real estate and go into debt. After all, we lose money if it stays in the bank —which is exactly what the Fed and all the Western central banks are counting on [6].

One problem remains: cash. In fact, all the people facing negative interest rates could think about getting their money out of the system and stashing it as cash or turning it into precious metals. This would result in a bank run which would subsequently initiate the bankruptcy of the global banking system. Indeed, the banking system is based on the fractional reserve model, and its stability dwells solely on its depositors’ trust. The big banks’ solvency ratios have reached alarming levels and are periodically falsified [7].

Only from this vantage point can we understand the different marketing campaigns that revolve around undermining cash, as well as the different laws promulgated to limit its usage [8]. Under a pretext of technological breakthroughs, practicality or the fight against laundering and fraud, what banks are targeting is our liberty to use our money freely.

And this only constitutes one phase. Desire for a progressive removal of cash [9] paves the way for the occurrence of digital money such as Bitcoin. Digital currencies are under the close scrutiny of central banks and infamous financial figures such as Blythe Masters, who has just launched a start-up specializing in these matters and for which he displays overwhelming enthusiasm [10].

A digital currency such as Bitcoin, run by central banks, constitutes the central bankers’ and financial markets’ dream. Indeed, Bitcoin is based on “blockchain” technology which records, in real time, the entire amount of transactions carried out. Since it represents the opportunity to operate a real-time database with a continuous build-up, it is a precious resource for central banks which, with more accuracy, could better control monetary supply and the velocity with which money circulates — two essential functions of any monetary policy.

Once this project is fulfilled, the central banks, which elude all democratic control, will have concluded with spreading their domination over our economy. Nothing will stand against their demented monetary policies. Far removed from entrepreneurial considerations, these policies’ only vocation is the protection of a parasitic, unfair and exploitative banking and financial system.