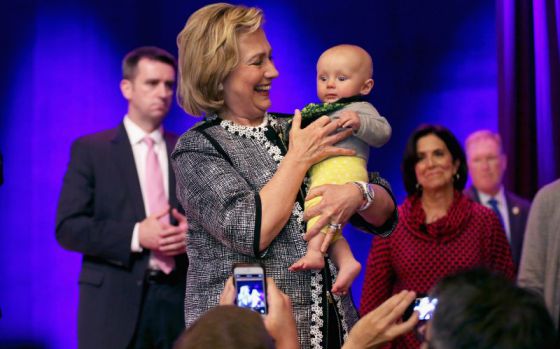 The U.S is one of only two countries in the world that does not offer any form of paid maternity leave. The other is Papua New Guinea. The issue of paid maternity leave has remained distinctly absent from election campaigns over the last few decades, but now features prominently on the agendas of the 2016 Democratic presidential candidates. The momentum from President Obama’s social welfare measures, along with generational changes and the current financial situation, have all contributed to the candidates making this commitment, something unthinkable only four years ago, and something that is at odds with existing policies.

“Workplace cultures, government policies, and cultural attitudes, by and large, still act as though it is, or it should be, 1950 in middle America: Men work. Women take care of home and hearth. Fathers provide. A good mother is always available to her children,” writes Brigid Schulte in her book “Overwhelmed: Work, Love, and Play When No One Has the Time,” which maps the difficulties of juggling work and family life in the U.S. However, the facts speak for themselves, showing 75 percent of women with children working outside the home.

The U.S. is the only member of the Organization for Economic Co-Operation and Development that does not require companies to provide paid maternity leave. Current legislation only guarantees that companies with more than 50 employees will offer 12 weeks of unpaid, job-protected leave following a child’s birth. This period of leave is also the shortest of the world’s 41 leading economies.

The International Labor Organization stipulates that countries should recognize a minimum of 14 weeks of maternity leave, that mothers receive at least two-thirds of their salary during this period, and that this remuneration is covered through public services. The U.S. is the only developed country that does not meet any of these requirements. According to the Department of Labor, just 13 percent of American working mothers received some form of paid leave in 2014.

Experts consider the current situation to be a consequence of World War II. While Europe established various social programs and protections to ensure that families were able to have children and maintain their jobs in the first few decades of the recovery, in the U.S., women who went to work during the conflict had mostly returned home by the end of the war.

The U.S. has also been prevented from heading in the same direction as the rest of the world by a business and trade union culture, which is less geared toward protecting employment rights through federal measures. America’s largest businesses, which command great influence in the election process through campaign financing, are also reluctant to see the federal government step in and regulate how they should be running their businesses, and as such is the reason why so few lawmakers have taken up this initiative.

For Schulte, this impasse has contributed to change coming slowly through state and local governments, as that legislation does not depend on Congress in Washington. The latest authority to approve such a similar measure is precisely that of the capital, where in the last few weeks, 16 weeks of paid maternity leave has been given the green light, the most extensive measure nationwide.

In January of this year, President Obama signed a presidential memorandum allowing all federal employees to take up to six weeks of paid leave. This measure coincided with his State of the Union address, in which for the first time, he defended the need to change current legislation. Over the past year, large corporations such as Microsoft, Adobe, Google, Facebook and Goldman Sachs have come on board and now offer paid maternity leave to their employees.

The majority of these are technology-based companies responding to generational change, or to millennials, who pay particular attention to this type of benefit; so, they are adapting their job offers to new employees. For Schulte, another unavoidable factor is “that fathers are beginning to feel as much time stress as mothers, and in some cases, more.”

What Do the Candidates Say?

The issue of paid maternity leave has entered the debate at precisely a time when it is garnering strong public support. Some 81 percent of Americans, including 94 percent of Democrats and 65 percent of Republicans, believe that equal pay, paid maternity leave and public education are “good for the nation,” according to data supplied by the organization Make It Work. Some 60 percent of women are also more likely to vote for a candidate who supports equal pay between men and women, a high minimum salary, and paid maternity and sick leave.

Democratic candidate Hillary Clinton has on several occasions rejected the idea that this is a “women’s issue,” and includes paid maternity leave among measures that can benefit the entire country. “What’s good for women, is good for America,” she stated when she promised to do away with the fact that a quarter of all women in America return to work within 10 days of giving birth. “People say to me, ‘How will that work economically?’ Well, it works in most of the rest of the advanced economic world, and it works in a far-off place known as California.”

Along with Clinton, Bernie Sanders has defended a draft bill that would recognize 12 weeks of paid leave, and that would also extend to all employees, not just those who have a permanent contract. “When you have a baby, we’re not gonna separate you from your newborn baby, because we are going to have medical and family paid leave, like every other country on Earth,” argued the Vermont senator during last week’s Democratic debate.

Marco Rubio has so far been the only Republican candidate to propose a similar measure. The Florida senator believes that “too many Americans have to choose between being there for their children in times of great need, or meeting the basic financial needs of their families.” Rubio is proposing a 25 percent tax credit to employers who offer at least four weeks of paid leave. The tax credit would be limited to $4,000 per employee per year, with a limit of 12 weeks of leave.