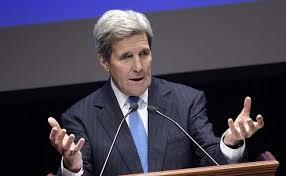 An article published in The National Interest on Jan. 31 entitled “Why China and America Don’t See Eye to Eye on North Korea,” was critical of Secretary of State John Kerry’s critique of China’s position on the North Korean nuclear problem. The author believes that China’s position was reasonable. Chinese readers commended the article by saying that some Americans do know the truth. In fact, the author was like the child who points out the emperor’s new clothes, making it apparent that Kerry is acting as if he is ignorant while he is fully aware of the facts in North Korea.

The article objectively stated China’s view. “The origin and crux of the nuclear issue on the Korean Peninsula has never been China,” said a Ministry of Foreign Affairs spokeswoman. “The key to solving the problem is not China.” While China has reiterated this stance, few Americans are aware of it, making the erroneous theory that China is responsible for the North Korean nuclear problem quite popular.

Kerry has repeatedly asked China to pressure North Korea, which the article believes is unrealistic. “China-DPRK ties should not be understood as a top-down relationship where the latter follows every bit of advice offered by the former,” the article stated.* This is a reasonable view. North Korea emphasizes independent diplomacy, and developing nuclear weapons is its national policy. According to analysts, in the beginning of the six-sided talks, North Korea repeatedly said that as long as America guaranteed its safety, it would give up its nuclear program. The American president at the time, George W. Bush, was adamant and refused the request. After China worked as a go-between, America agreed to guarantee its safety, but North Korea changed its mind. North Korea’s safety could only be guaranteed by itself, if America did so, we would still develop nuclear weapons. North Korea believed that having nuclear weapons was the only option in defending against the American threat and protecting its national security. Since North Korea is so obsessed with the nuclear program, it won’t listen to anyone’s persuasion or bow to anyone’s pressure on this issue.

In January 2013, North Korea launched its Kwangmyŏngsŏng-3 satellite, widely known as a ballistic missile test. When the U.N. Security Council sanctioned the country, North Korea’s national defense committee released a statement saying that there might be more discussions and cooperation for the peace and safety of the Korean Peninsula in the future, but there would be no more talks of denuclearization. More effort should be focused on promoting denuclearization of great powers like America. Only when the world, including America, is free of nuclear weapons, can North Korea be the same way. The stern words and inflexible attitude indicate that the North Korean nuclear program is now an untouchable zone.

America has changed its policies numerous times when it comes to North Korea’s nuclear issue; the only constant has been the joint military exercises between America and South Korea. The resulting threats toward North Korea have only managed to provide justification for its nuclear tests and motivate its nuclear program. If nuclear development in the Korean Peninsula is a spreading wildfire, North Korea is adding firewood while America is fanning the flame. Now that the fire is growing bigger and bigger, how can America blame China for being irresponsible? Where is the justification?

The National Interest article said, “In fact, Beijing’s position is understandable, indeed, reasonable from China’s standpoint, even if thoroughly unwelcome to Washington.” The evidence: If China imposed an embargo on fuel and food for North Korea, and destroyed a strong administration in Pyongyang, North Korea could face a huge crisis and armed conflict between factions as a result. Refugees could cross the Yalu River into China, resulting in a bigger crisis than that of Syrian refugees fleeing to Europe. China could face a quandary with nuclear implications, and South Korea and America could jointly cross the DMZ to forcefully unite the Peninsula. This would be the greatest nightmare for China. The National Interest author asks: “So, explain to me again, Secretary Kerry, why China should ruin its geopolitical position to further Washington’s ends?” The analysis has a lot of foresight and is worth our attention.

Overall, Americans do value evidence, but due to distractions from politicians and the media, they do not really know China and have misunderstandings about the country. Making the American public understand the real China is crucial, which is why I quote from this article in The National Interest and value its views.